The second of several new locations is online in preparation for league play in 2008: Tennis San Francisco. This league site will service players city players to the suburbs. We will now work to reach as many tennis players in the area to let them know about this well received Tennis League.
Posted by Tennis Leagues at 11:11 AM No comments:

Posted by Tennis Leagues at 6:17 AM No comments:

The first of several new locations is online in preparation for league play in 2008: www.TennisOC.com Tennis Orange County. This league site will service players from Long Beach to Anaheim Hills, La Habra, Irvine to Mission Viejo. We will now work to reach as many tennis players in the area to let them know about this well received Tennis League.
Posted by Tennis Leagues at 6:15 AM No comments: 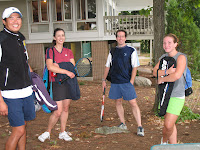 When possible the league tries to organize larger social tennis outings for the sole purpose of enjoying tennis in a larger group environment. On Sept. 9th, 2007 Tennis NorthEast the Boston group was graciously hosted by Nashawtuc Country Club out of Concord, MA. Over 32 players attended a Mixed Social Tennis Doubles event where players enjoyed playing with several different partners through-out the 5 hour event. An over-the-top BBQ was set up by Nashawtuc and the players raved about the food and the tennis.
Posted by Tennis Leagues at 6:01 AM 1 comment:

The league format has been quite successful to connect players with dedicated tennis partners. The various city sites reach players that might be a little weary of league play or don't want to be defined by a set of playing dates. So we are developing a less formal/less structured product for these players; the Tennis Partner Program. This program will be a managed list of players who want to be contacted to play but more for the enjoyment of tennis and less for the thrill of league play. We will kick off two test products in DC and Boston for the rest of the year. The product should make it to most cities by Spring 2008.

DC Tennis Partner Program
Posted by Tennis Leagues at 6:00 AM No comments:

Tennis LosAngeles has an extremely dedicated playing base and its proven by the Summer Season. The 90 players that participated broke the record for the number of matches played per player in a season with 7.8 matches per player. The league had 25 players who played 10 or more matches in the 8-week season. A true testament that the league attracts passionate tennis players.
Posted by Tennis Leagues at 5:59 AM No comments:

A lot of the players who play in the various leagues are new to the city and use the league and tennis as a way to start to feel at home with their new place of residence. Here is one of the testimonials:
From Lamaar Walker 7/16/07 (2-time returning player) Tennis NorthEast,I was new to the Boston Area, and desperately needed to get some consistent tennis play in. I joined TNE and in a matter of a week, had already been matched up with 5 players and matches. Even now, I manage to get a match or two in every other or couple days (schedule permitting). The small fee is so worth the network that you join when you become a TNE member.-Lamaar 12 matches played in about 6 weeks of play
Posted by Tennis Leagues at 5:57 AM No comments:

The league's philosophy is if the league has contacts and you have time we'll connect you. The only boundaries we set up are between the skill levels. It took a little over 1-month for the old record for matches played in a season to be broken. Jeremy Lange of the Tennis Los Angeles League played 22 matches + 1 playoff match during the Summer 2007 Season. I wonder if the weather and Jeremy's love of the game had something to do with breaking the record? This season we had over 10% of the participants playing more than 10 matches in the 8-week season.

Jeremy's Division
Posted by Tennis Leagues at 5:55 AM No comments:

What's one of the rewards of running this service? The league staff now has partners in each of the cities where leagues are run. On Sunday, August 11th I had the distinct pleasure to play with Elena Danova from the Tennis New York league in Central Park. 30 tennis courts that are always packed full with players either competing, just hitting or taking lessons. Just like NYC the scale of the facility is impressive. Elena was a pleasure to hit with as she enjoyed striking the ball with pace. But, she was a little limited in her movement from a 12-mile road race the day before. The aspect that I think the park needs to improve on is the grade school buzzer that announces the end of the hour of playing time. I felt like I was late for class! -Steve, Lead Admin
Posted by Tennis Leagues at 5:52 AM No comments:

The culmination of every season is the playoffs: players who have won 5 or more matches in a season participate in a single elimination tourney that leads to increasing close matches and ultimately narrows down to a champion for each league (for an example, see below). Having won 5 or more matches is not always an easy task, and it takes a good amount of effort (which may involve playing a lot more than 5 matches in a given season) to make it to the playoffs. Playoff participants for a given skill level can be from several divisions of that same skill level throughout the league. A playoff pool can have anywhere from only 2 to more than 15 players, depending on the size of the league. The beauty of the playoff format is that as each round completes, the tennis gets better and better. . . until we have one eventual league champion for that season.

Spring #3 Competitive Playoffs from TennisDC
Posted by Tennis Leagues at 4:36 PM No comments:

TennisPhilly is one of the smaller franchises in the network. But, the players are the most passionate of all the cities. During Spring Season #2 we only had 55 Men participating, but the players played a total of 204 Matches over an 8 week season. That was a record breaking average of 7.4 Matches per player.

Competitive Division from the season
Posted by Tennis Leagues at 4:34 PM No comments:

7/6/07 We connect players with as many partners as available.

The league's philosophy is if the league has contacts and you have time we'll connect you. The only boundaries we set up are between the skill levels. A testament to this fact is we always have quite a few players every season play 10 or more matches over an 8-week season. If your playing tennis and meeting up with new people it's great for both you and the league. During TennisDC's Spring Season #1 Azadar Kazmi meet up with an astonishing 21 partners on his way to the Finals for season. Great season and a Tennis League Network record.

Posted by Tennis Leagues at 4:31 PM No comments:

The league knows that the self-rating system is inherently flawed. The league uses the Purity of Competition rule to monitor match results and move players up or down levels either at the end of the season or even mid-season if necessary. A testament to system is the below score:
TennisPhilly, Spring Season #1 Competitive Division:
6/4/07 Andrew Skalkin over Francisco Montero 6-7, 7-6, 7-6 A 3+ hour marathon

Posted by Tennis Leagues at 4:23 PM No comments:

The league promotes Men play Men and Women play Women, but quite often we get a Women player or two who is extremely talented and ends up playing with the Men. Pretty much every season in each city we have 1 or 2 Women players playing with Men. Kendal Robinson is the first to win a championship and beat out the Advanced Men during TennisDC's Summer Season #1. Congrats to Kendal and it's proof that Talent transcends Gender.
http://www.tennisdc.com/archive.htm#Summer_1_2006
Posted by Tennis Leagues at 4:17 PM No comments: