Free Tennis Partner Program has been kicked off in Raleigh-Durham

The first of several Free Tennis Partner programs has been kicked off in the Raleigh-Durham location. We're communicating with the community to get as many tennis players as we can connected out on the courts. The goodwill program is also being offered in Dallas, Orange County and Miami.
Posted by Tennis Leagues at 6:52 PM No comments:

Congrats to Robert Nazy on meeting up with 20 Tennis Los Angeles Partners over the 10 week Spring season. It takes a great amount of effort and passion to make it happen.
Per the $10 for 10 rule, Tennis League Network has given Robert a free season for his dedication. Here's Roberts comments on the season: "Thank YOU for setting up the league. I enjoyed playing all the guys and it was a challenge adapting to the different styles of play. Most all the guys were friendly, personable, and most importantly, all had decent weapons on the court with which to compete at a high level of play. I had some very tough matches, which were the most enjoyable. It’s much more fun when the game is close and I get pushed physically and mentally." 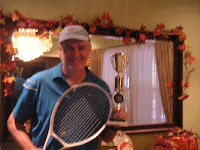 Posted by Tennis Leagues at 7:50 AM No comments:

In our effort to servicing all the major metropolitan locations, we proudly announce the 12th location in the Tennis League Network: www.TennisDenver.com Metro Denver's online Tennis League. We'll be working hard to try to get a Fall League together for the participants.

Posted by Tennis Leagues at 9:03 AM No comments:

The league constantly working to improve the over-all experience for the players. Connecting players with other great partners just isn't good enough.  So we have got the beta version of the new software layout online for Tennis Philly participants. We now have login access for player's contact information, more information for players who are members and the new Tennis Partner Program software.  The plan is to have all the cities online with the new software by May.
Posted by Tennis Leagues at 11:43 AM No comments:

Spring is near for some cities, here for others!!

After a long winter it's great to know that spring is close. TennisDC will be kicking off its first season of the 2008 tennis year on Monday while Los Angeles and San Francisco players have been off and meeting up on the courts. The nice weather can't come soon enough for Boston, Chicago and Philadelphia players. Can you smell it? outdoor tennis is near.
Posted by Tennis Leagues at 1:19 PM No comments:

Tennis League Network, LLC has finalized its negotiations with Tennis Warehouse to provide players easier access to the largest depth of tennis products in the online world. We are also excited to announce that Tennis Warehouse has sponsored the Prize Pool to reward players after their accomplishments on the courts.
Posted by Tennis Leagues at 6:58 AM No comments:

The Network is growing to the Miami - Ft. Lauderdale Tennis playing community with www.Tennis-Miami.com. We plan on trying to organize our first league after the summer heat starts to die down. Get on the Interest list today.
http://www.tennis-miami.com/interest.htm
Posted by Tennis Leagues at 8:30 AM No comments:

The Network is growing to the Dallas - Ft. Worth Tennis playing community with www.Tennis-DFW.com. We plan on trying to organize our first league after the summer heat starts to die down. Get on the Interest list today.
Posted by Tennis Leagues at 1:04 PM No comments:

In an effort to continue to give the organization a national presence the business name has been changed from Tennis NorthEast, LLC (Boston League) to Tennis League Network, LLC. More changes to come.
Posted by Tennis Leagues at 7:23 AM No comments:

January Discounts are offered on all the leagues

In an effort to get a nice momentum built going into the Spring Seasons, we have put up the January discounts for all the leagues. This is your way to get into the spring season at a discount and build the enrollment pages for other players who are on the fence about joining.