As you have probably learned, the range of skill levels varies widely in the Tennis League Network, which is one of its primary advantages.

Some are beginners, and others play at such a high skill level that they achieve entry into their league’s Elite division. Meet one of those players--Tom Emmitt.

Tom is unique because he is one of about only a dozen players in the Elite division of Tennis Los Angeles, where you can play tennis all year long.
As a 4.5+ player, Tom has won the championship in both the 2009 Summer League Men's Advanced 4.0, and the 2008 Summer Season Men's Competitive.

Like many league players nationwide, Tom is one of those comeback kids. He dropped out of tennis for what turned out to be a two-decade sabbatical. He explains:

“I love to play tennis and in college I played 4.5 hours a day. But it was an obsession, and there was tremendous pressure to improve. Finally, there had come a point after playing high school and college tennis many years ago that when I stepped on the court it wasn’t fun anymore. I did other things for a long time. After putting my rackets away for 20 years, I decided to come back to tennis. Why not? I’m still competitive. Most important is that I have rediscovered the joy of playing tennis, and truly love every minute that I am out on the court. But I don’t have to care about it. Even if I lose, I can be happy that I got on the court and played. It is also a great form of exercise that trains the legs, as well as the core.”

Watch out for that “still competitive” comment”, all you Los Angles players. This guy is dangerous. “I would say that I am a solid 4.5, who occasionally plays up to a 5.0 level, and unfortunately, occasionally plays down to a 4.0 level.”

The primary reason Tom likes his league is that “It’s a really great way to hook up with people of like ability. Most people who sign up are active. They don’t just sign up and forget about it. The thing that stands out most is the quality of people involved. Everyone is great about showing up on time, and calling if they have to cancel or reschedule, and everyone calls the lines fairly.”

One of Tom’s memorable matches was the final of the advanced division two seasons ago, when he lost to rival Jonas Stasivicious in three sets. We both played well, and in the end, he won by a break. Neither of us had a mental letdown, and we maintained a high level of play for the entire match. I would have liked to win, but somehow, as long as I play my best, and compete for the whole match, I can live with the results either way.” 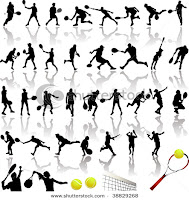 Jonas is just one of Tom’s rivals; add Ken Chen and Paul Ferguson into the mix. “I have a tough time with all three of them, and can win or lose on any given day. That makes it exciting.” Jonas came into the league about a year ago. “He slaughtered me with his big strong forehand. We have played a lot of really close matches. I look forward to playing with him. It’s never a blowout, but a real cat and mouse match. I’m 48 he’s 24 or 25. I’m the resident old guy in the league.”
Tom would definitely recommend Tennis Los Angeles to other players. “There is a place in the league for any skill level or level of participation. I can play once a week or 4-5 times a week. It’s very flexible; it’s whatever you desire.”

For Tom, stepping up to an elite division was a “great step.” However, with a number of new strong players in Tennis Los Angeles this season, he his work cut out for him. On the other hand, if his past success is any indication, he is a challenging opponent and has a good chance to compete well in this 2010 season.
Posted by jean kirshenbaum at 7:53 AM