Many athletic kids are good at more than one sport. Just think of what pro tennis would be like today if Rafael Nadal had chosen soccer over tennis -- Roger Federer might still hold the number one ranking! Or if Svetlana Kuznetsova, winner of both the US Open and the French Open, had chosen cycling, her parents sport– and instead rejected it because she thought it was boring! Or if Tracy Sinclair hadn’t come back to tennis after choosing swimming over tennis- Chitown Tennis would be short one sharp player!

school I had to choose between the two sports. I chose swimming.” (Can you believe that!) “In the long run, it might have been better if I had chosen tennis, since it's easier

(and more fun to play tennis ) to do that as an adult.” Like the rest of us, she got smart, and, ultimately, tennis was her choice. She picked it up again when she moved from Cincinnati to Chicago at age 33.

A member of Chicago Tennis since 2007, Tracy is a 3.5 competitive player who has won about half her matches. Like most of us, she is a fan of her league, which for her is “a better experience” than belonging to her private club. 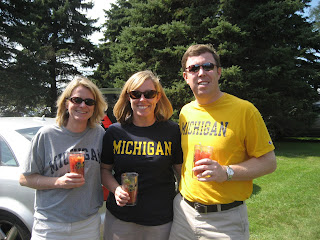 “I think it’s fantastic. I play lots of matches, it’s easy to set up, and it’s inexpensive.(Tracy, middle, with cousin Kelly and brother Andrew at last year's Michigan/Notre Dame game.) Tracy, who at the beginning of the season played 4-5 times a week, has played many “really close” matches this year, losing twice in tie breaks after splitting in pro sets. If I had won all those matches I would have a better record. Even matches that appeared to be a blowout one way or another were actually tended to be really competitive…


If you are looking to get back into the sport, this is a great way to do it. I’ve also found that even if you have friends that play, they are not necessarily going to play at your level. Chitown allows you to set up competitive matches easily.”
“I think Chitown is a good way to secure matches. It’s a really good value. In other leagues, people may not play. In the league, it is within your control how often you play and you can schedule as many matches as you want. You are not paying for court time. People are really nice, and they are out there to have a good match. I don’t mind that I lose more matches than I win. Just playing helps me improve. For me it’s perfect.”

Posted by jean kirshenbaum at 7:05 AM

I really liked your article, “TLN profile: Tracy Sinclair of Chitown Tennis- “For Me, It’s Perfect!”.”

Pretty good post. I just stumbled upon your blog and wanted to say that I have really enjoyed reading your blog posts