1. Which league are you a member of?
I am a member of the Austin Tennis League playing from North Austin region.


2. How long have you participated in your league?
Spring#2 2014 was my first tennis league season ever. I reached the Semi-Final stage. Quite a good start :)

Summer 2014 is only my second season in the league. Having qualified for playoffs again, I am looking to improve upon my last performance. Admin Note: Shantanu ended up losing in the Semis. Playoff Tournament Link.  Fall 2014 will be my third. Making it to the last four of both previous seasons, I am excited and looking forward to a action packed Fall season with record number of people participating this time around.


3. How did you first learn about it?
I started as a beginner by going to tennis meet-ups around the city. Looking at my game and level of competitiveness some guys suggested trying out a league to take it to the next step. I googled and found ATL.


4. How often do you play?
I play outside the league as well with people from meet-ups and friends made through tennis from all over Austin city. I played more than 7 times a week till about a month or two ago. Currently I play 4-5 times a week.


5. What do you like most about the league?
First of all there is just the love of the game that you can share with like-minded people. That is so crucial in building up a good attitude towards the game and carrying that over to other aspects of your life.

Secondly, the level of competition is amazing in most players. Lastly, stats like division standings, game W-L percentages, and the pursuit for #1 ‘Player Of The Year' (POTY) rankings help improve your game all the while giving you an aim to go after.


6. Tell us about your most memorable match(es)
My most memorable match would have to be against S. Farooq on 05/16/2014. The conditions were very windy and this was my first experience of playing in winds which made me nervous. My opponent might have known this scenario all too well as he seemed pretty relaxed. I had been unbeaten in the league till that match. With wind speeds nearly 10-12 mph, I lost the first set (3-6). I didn't realize quickly enough the need and extent to which I had to calibrate my shots according to the wind direction when sides were changed. Learning from the first set, my game improved but I was still (3-5) down in the second set receiving serve to stay in the match. To win the second set (7-5) and then to make a comeback win by winning the last set (6-2) felt like the greatest achievement for me at that time and gave me complete satisfaction of playing my best tennis.


7. Who are your favorite rivals in the league? Why?
Favorite rivals would be the ones who love tennis just as much as I do, are just as competitive as I am and from whom I can learn the game. Matt Laakso, Cesar Montalvo to name a couple. 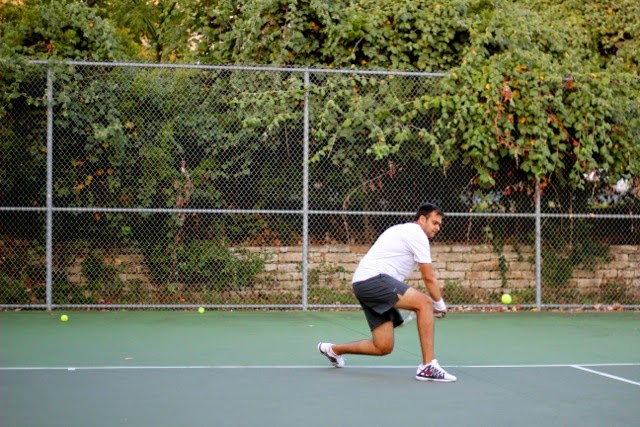 8. Do you have any other interesting comments about your experiences with the league?
The first time I picked up a tennis racquet was October 2013. I joined the league around March 2014 and ATL literally made me fall in love with tennis. So much so that in the early days when I didn't own a car, I used to rent from enterprise for a day or two just to travel to different locations and play these guys. Some were as far as 15 miles away from my place.


9. How did you get started playing tennis?
I have always been into sports since childhood having played Badminton, Cricket, Basketball in school/undergrad representing various teams; then Racquet-ball during Grad college @ USC (SoCal). This helped me pick up the game faster than others. Interestingly, I actually went searching for badminton in Austin but didn't find much response. This helped as I ended up choosing: TENNIS!


10. What level player are you? (NTRP rating)
I am currently a 4.0 NTRP player working hard to improve further.


16. Does any of your family members play tennis? If so, tell us a little bit about them.
My dad has been a champion at various racquet sports like  Badminton, Table-tennis, Tennis during his college days. That's where all the credit in making me an athlete goes to. He was my first coach in badminton and to this day along with my mom supports me in sports, critiques my game and celebrates in my success.


17. Tell us a little bit about yourself, for example: What do you do? Where did you grow up? What are your hobbies (besides tennis)? (Feel free to share any interesting details about your life.)
I am a Software Engineer at Alcatel-Lucent's R&D division located in North Austin. Born in Mumbai (Bombay) on the west coast of India and brought up in Aurangabad, I have been blessed with parents who always emphasized the importance of extra-curricular activities along with academics. This helped me excel in various fields whether it be in sports, robotics, co-editing my college annual magazine or helping me get a Masters’ degree from USC (SoCal).

As of now, tennis, traveling and photography take up most of my time.

Posted by Steve Chagnon, TLN Lead Admin at 8:59 AM