Jeffrey Barr - His passion for the game burns so BRIGHT! 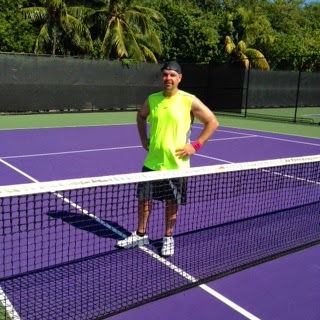 Player Profile: Jeffrey Barr - We recently reached out to JB to get his thoughts on tennis and the Philadelphia tennis league in general. Jeffrey's on court achievements include a 2014 National Semifinalist at the East Coast End of the Year Tourney in Key Biscayne in addition to 2 doubles and 1 singles final appearances in Tennis Philly.

TLN: Where are you from and tell us about your rating?
JB: I play in Tennis Philly and my rating is a 3.5. I play singles and doubles and I have been playing since Summer of 2012.

TLN: How did you hear about Tennis Philly?
JB: Great story. I had a few friends that would meet up for once a week doubles matches. One of the guys was in the tennis ladder program and invited another member to join us because we were one short that week and it was this kid named Tony Graziano. So during this friendly doubles match, we were on the same team. We won the match, and we all left and headed to the parking lot. I listen to rap music to get ready for matches and I was playing Meek Mill's Dream Chasers 2 which came out earlier that day in the car. He heard the tracks, which is straight fire, blaring from my car. He came over as he is also a rap fan and we just talked for a bit. He told me about Tennis Philly and they had a doubles league and that we should join. Tony is now one of my very best friends and the obsession of Tennis Philly bit me on that night.

TLN: Clearly you played tennis before that night. How did you begin playing tennis?
JB: Wow. Let's see....I became a fan of sport back in the early 80's watching those Borg-McEnroe classics at Wimbledon. I always followed the sport. I used to play with my friends in the 90's but nothing to serious. Actually, my niece Becki wanted to go out for her high school team in 10th grade back in 2007 and asked me to show her how to play. So all summer I worked with her on how to play...serving, returns..you know really basic stuff. We did this for weeks and weeks. So when she made the team in the fall, I said, I really MISS this sport. I never played in high school or college or anything like that. So you can say that I am "self made".

TLN: How often do you play?
JB: Never enough! Ideally I like to play two or three times a week. During the season, sometimes it goes over that with both singles and doubles season sometimes going on at time same time. 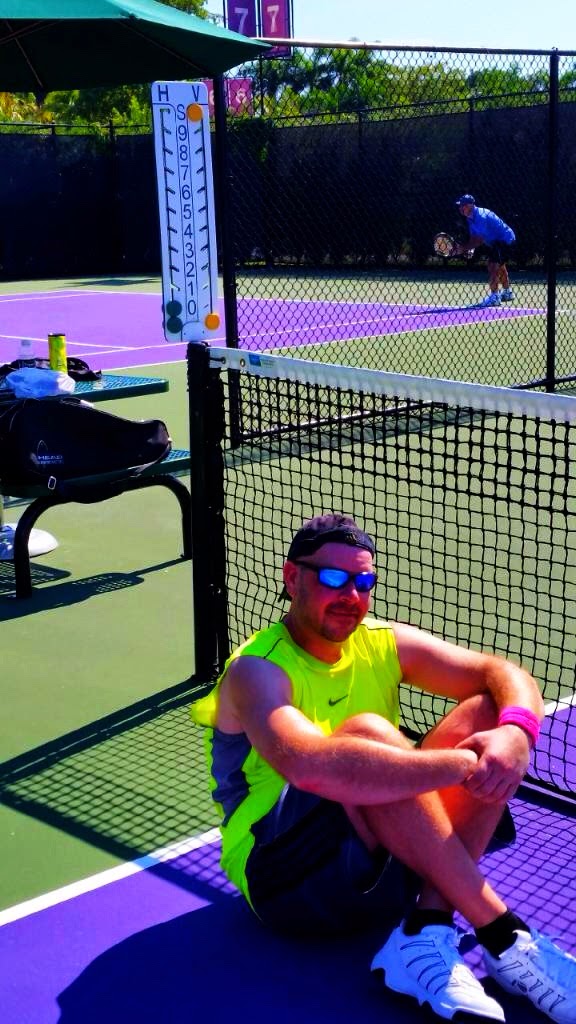 TLN: What do you like most about the league?
JB: The league is well run and organized. I love how competitive it is. The league is similar to a minor league baseball farm system. You start from the bottom level and have to EARN your way through that level to get PROMOTED to that next level. So you are truly in the level that you should be in. I have been DEMOTED and PROMOTED in divisions during the season. Being demoted sounds soul crushing, but it actually helps you build confidence and get your game back. Commish actually made the right call last spring when I got bumped down. But I got better and earned my way back up. It's a results oriented league, but end of the day you have to get BETTER. Plus, the league is a big family with some really good guys.

TLN: Who would you say are your biggest rivals in Tennis Philly?
JB: Hahaha! Wow, man...Tony is my closest rival and we call our matches 'El Clasico'. But Tony is so much better than me that you really can't call it a rivalry because I have never beaten him. Adam Hartzell would be my biggest rival. We are like 5-5 all time against each other in 10 matches, including his 2012 fall championship against me, which changed my physical and mental approach to the sport. We are friends and he is a good guy. We had some classic matches which are the equivalent of doing a mudder run. We literally had 50-60 to shot rallies. We played a one hour and 35 minute SET! On the doubles side, and Tony would probably agree, is the Saver/Hague team. This fall, we split 4 matches and all of them were hard fought battles. Again, I like those guys. That's what I like about this league. Nobody has any egos. We go to war with these guys and at the end of day we respect each other and respect the integrity of the league. That's important.

TLN: What are your most memorable matches?
JB: Wow: Great Question....again the 2012 Fall Championship, when I lost to Adam, it made me want to get in better shape and I lost 50 some pounds the following spring because I just wore down in that match. A 2013 match against Corey Raynes. I lost the first set Love-6 after losing 7 straight matches. That was when I was recently demoted and thought I was in danger of getting demoted, AGAIN! I was touched by an angel and grinded it out to come back and win that match. And this November 1st in Nationals in Miami, I beat a couple of really good players in a span of 4 hours on Super Saturday. Those two players went on to play in the finals the next day. On the doubles side, this fall in the semis Tony and I, beat Saver/Hague. It was our best performance in doubles. We were pretty happy with how well we played. But again, that is just off the top of my head. I have been fortunate to play in so many tough, competitive matches during my time in Tennis Philly. 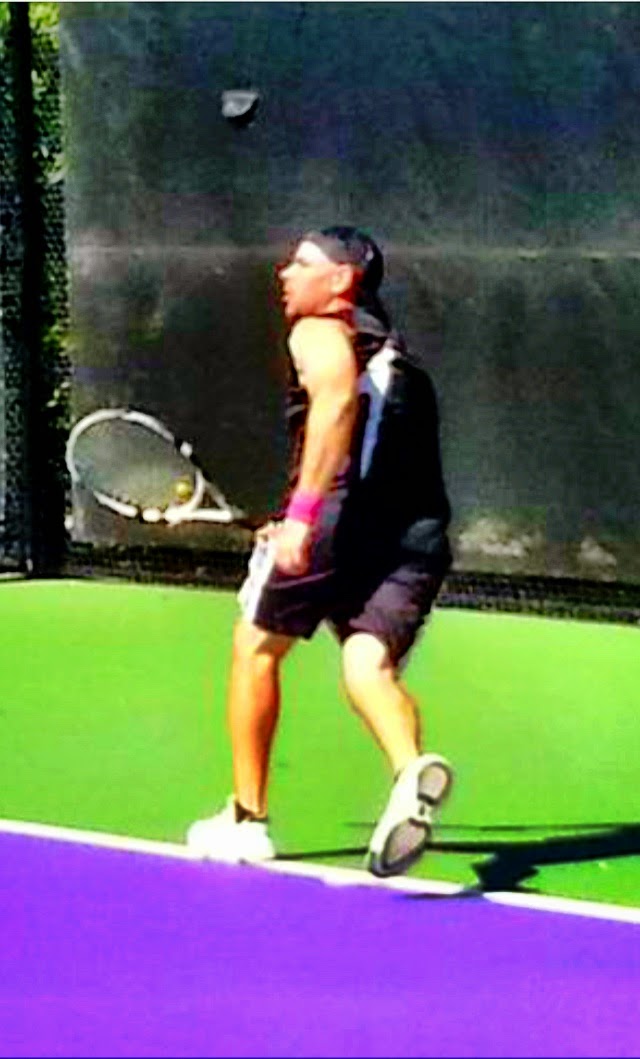 TLN: You mentioned the national tournament in Miami. What do you like about the tournaments?
JB: The year end tournament is like no other. To make the field and fly down there is the best feeling. The Tennis League Network staff run a first class operation. And of course, Key Biscayne is one of top 10 tennis facilities on the planet. But what makes this tournament special and hard to win, is the physical torture of playing 6 or 7 matches in 3 days. It's a grueling, physical and mental test. Players get hurt, players cramp up....I have a lot of respect for anyone who wins the tourney. Tony was a physical and mental force when he ran the gauntlet this year. This tournament is absolutely amazing on so many levels.

TLN: Have you had any interesting experiences with the league?
JB: I don't know how Tennis Philly does it. It an ultra competitive and legit tennis league, yet it remains a league filled with good guys and keeps its decorum. It doesn't have that bombastic, stuffy feel to it. In addition to the competitiveness, the league has a big heart. We raised over 7,500 dollars for Cancer Research Institute. I love the dynamics of this league. It's done...right. I have some good friends in this league and the league continues to grow nationally. We keep on trying to grow the league.

TLN: Why do you love tennis?
JB: I love the physical and mental aspects of the sport. I love the physical gladiator grind of a three hour match in 95 degree heat, and you come to the side for a change over and you don't know whether to lay down for a minute because you can barely walk or puke so you feel better. I love the mental challenge of convincing yourself to make a change or challenge yourself to step up and make a play. To see how you react about blowing that first set. It's strategizing about how to play your next opponent...staying away from his strengths and attacking his weaknesses. This sport has it ALL. It's extremely satisfying and insane asylum maddening all at the same time, sometimes in the same day!! 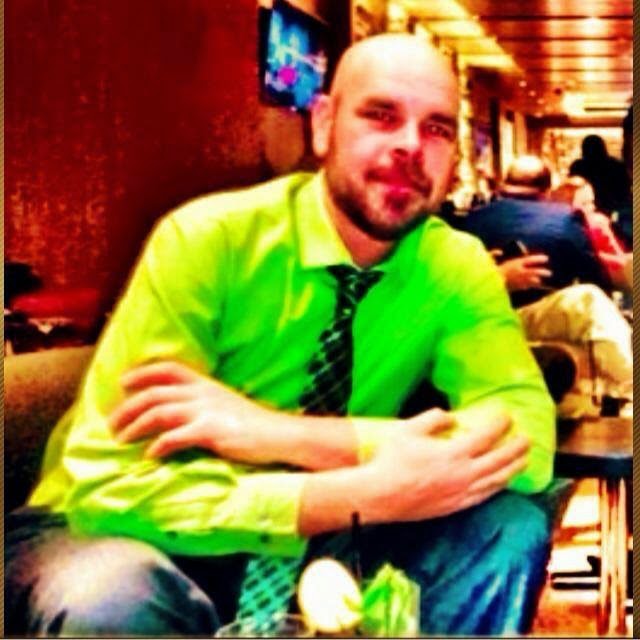 TLN: Speaking of strengths and weaknesses, let's hear your honest assessment of your game at this time.
JB: Ok.....Strengths... First serve...I got my first serve percentage up big time in 2014. First serve variety has been good. I have my big gun first serve and my more reserved first serve and I can mix them up. Defense is good. I can chip and charge well. Backhand was a major weakness and that's improved big time. My good friend, Sara Pilic came over from Italy in 2012 and went to school in Philly for a semester. She has a big, thunderous game. She has this two handed backhand that is just a MASSIVE weapon. I have picked up that stroke, took her pointers and studied her grip and leg work. I have been practicing the hell out of it, and started to pull it out during matches. It's a confidence and repetition shot. That's improving. Weaknesses? 2nd serve needs work, net play, need to be more tenacious all around, everything. Everything needs work!!

TLN: How do you stay in shape in the offseason?
JB: I am playing in a mixed doubles league (non league), doing drills, working out, keeping the diet in check and will be scheduling friendlies indoors. That's about all you can do up here. Life in a northern town!

TLN: Goals for 2015?
JB: Win a damn championship! Losing my third combined finals really sucks! But winning a championship should be hard! That's what makes it so desirable to achieve..... Seriously, just continue to grow my game, get more in shape, stay mentally sharp and let the results fall where they may. On the doubles side, just continue to tear it up. Tony and I played really good doubles down the stretch and we will continue to get better. Tony and I are talking about putting together a Tennis Philly Charity tournament in 2015, where the winner donates the prize pool to their favorite charity. We would also like to play in some more tournaments during the year. Tennis is looking up in 2015.

Posted by Steve Chagnon, TLN Lead Admin at 8:16 AM