Joshua Rey - Some time with a National Tourney Finalist


1. Which league are you a member of? 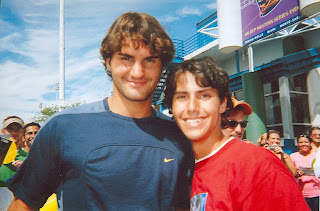 3. How did you first learn about it?
I moved to DC in January 2012 and quickly registered on the Tennis DC website. But it took me a little while to actually join a league because I was playing with a few friends every week. After a little while and a lot of improvement, I was eager to play against others.

4. How often do you play?Ideally at least twice a week.

5. What do you like most about the league?
I used to play in USTA leagues and tournaments but hated paying a fortune and feeling like a loss was the end of the world. There were doubles matches where I was the only one on the court who wasn't cheating -- including my partner!

But as I've moved, I've found way-better alternatives that provide incentives for players to compete as much as they want (Connecticut Tennis Circuit, ALTA and Tennis DC). Tennis DC is great for those reasons -- I can play singles, doubles or mixed and I don't have to rely on anyone else to schedule my matches. And for less than $30, it's a no-brainer. 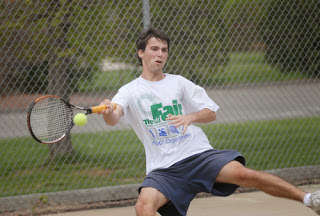 6. Tell us about your most memorable match(es)
I started pretty nervously in Fall 2013 -- losing three-setters in my first two matches to Richard Hencke and Vipul Chawla. I got the chance to play both again during the season and lost just seven games combined. That definitely gave me confidence going into the final against Stephen Gilson, who was beating me 5-1 in the first set before I won 7-6, 6-2.
This season, I've been playing mixed doubles with my girlfriend. We decided to challenge a few men's teams and lost a really entertaining match against the No. 1s from the other division, Louis Velasco and Abner Garcia. Playing well can be fun, even in a loss.

7. Who are your favorite rivals in the league? Why?Stephen Gilson and I played twice last season with the exact same score -- but two totally different matches. I enjoy playing him because we both have unique styles. He slices his backhand a lot and I try to surprise opponents at the net. It makes for a fun match.
I also faced Jeremy Sobeck twice at the 2014 End-of-the-Year Tournament. I probably played the best match of my life to beat him in the round robin. Serves, strokes, volleys, lobs -- everything was working. But when we met again for the championship, he overpowered me.

8. How did you get started playing tennis?I began playing as a high school freshman in Miami and I got double-bageled more times than I can remember. Alex Bogomolov Jr., who went on to reach the Top 40 as a pro, was in my team's district. Two of his teammates played at the University of Miami as well.


Unlike many other sports in America, tennis has a way of uniting people. I've made lifelong friends throughout the years, including an umpire who helped me get Wimbledon tickets and a journalist who housed me while I was there. Then, I hit it off with someone at Wimbledon who has since stayed with my family in Miami. I don't think that kind of thing happens with baseball, basketball and football.

11. What are your tennis goals this year? 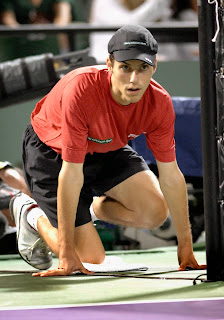 After winning the Fall 2013 DC title, I knew that I wanted to be part of the 2014 End-of-the-Year Tournament in Key Biscayne. It felt like a homecoming because I was a ball-boy there for eight years at what's now known as the Miami Open.    http://tennisdc.com/3015/tournament_report

My mom and dad, whom I was too nervous to invite to my high school matches, came out to watch. I wound up playing seven matches in less than 48 hours and finishing 5-2.
Going in, I was hoping that I wouldn't get crushed by the competition. Making it all the way to the final was a big surprise and now it's on to the DC mixed doubles playoffs!

Posted by Steve Chagnon, TLN Lead Admin at 7:20 AM