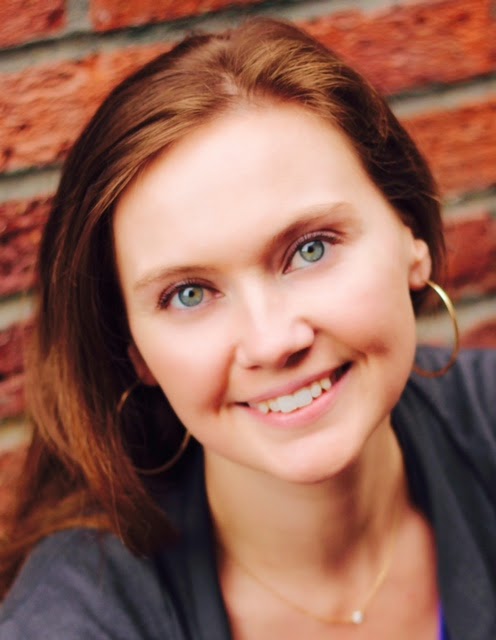 Players meet Megan Hescock out of the Metro Chicago Tennis League. Megan started to play with us in the Spring of 2012 and has fallen in love with our service.  When we awarded Megan the 2nd place 2014 Chicago Player of the Year award she returned this message:


'I can't remember if I ever emailed you back! lol Basically I wanted to express how awesome I think Chitowntennis is. I'm absolutely in love with the program, the management, everything. When I moved to Chicago 4 years ago, I had no idea joining this program would be so fulfilling on so many levels. Playing tennis keeps me balanced in a way I didn't even know I was missing. Thank you for running such a truly excellent programe' 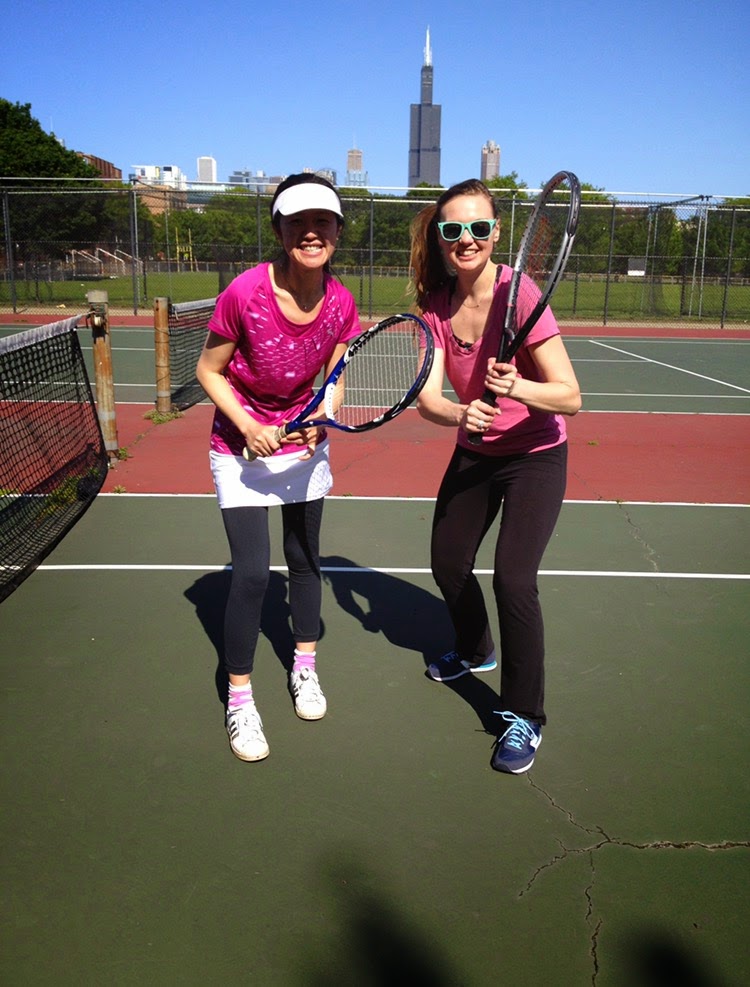 Please let me know there's anything I can do to help you with the Chicago program.
So we asked Megan (ChiTown Tennis Profile) if she can tell the community her Tennis League Network story.  Here it is:
As you might not know, I started playing tennis in Greece on a 12-year-old co-ed league when I was about 23. I was living in a tiny town on Rodos, and I had nothing else to do! So I originally learned to keep the score in Greek- and I still do in my head! 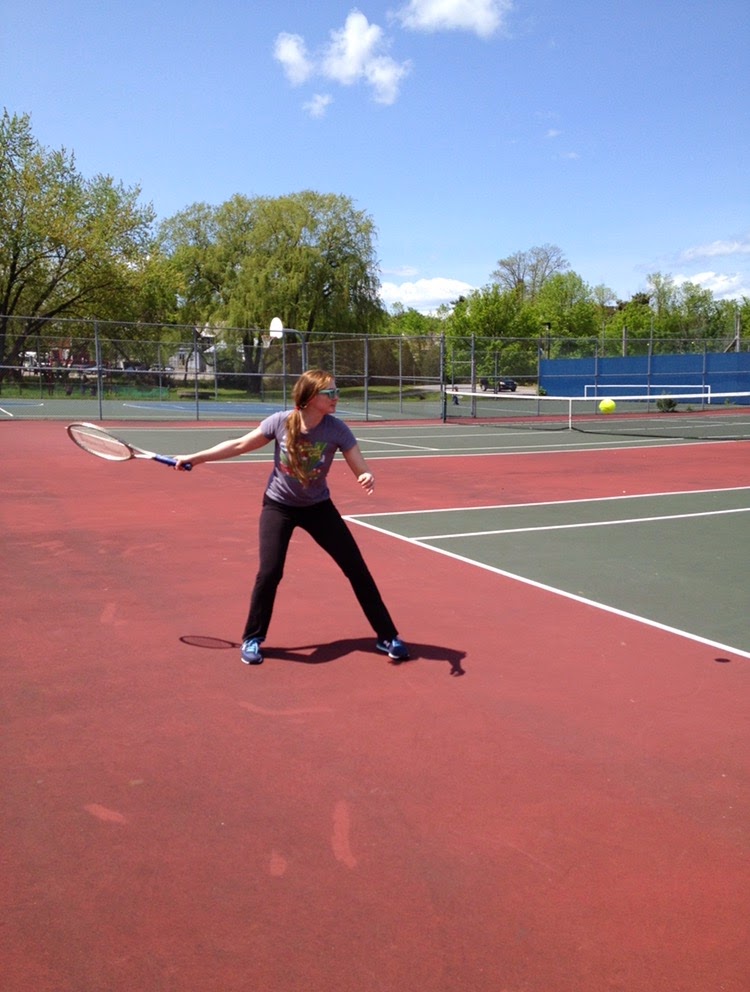 I've been a part of the league for 3 seasons. I believe I heard about it by googling tennis programs in Chicago when I moved here 4 years ago. I'm so glad I did!!

I love the league's structure and management style. The structure gives you total freedom and flexibility in setting up matches, and the management is completely understanding and always responsive if any issues arise. Good management is the most difficult thing to find in ANY organization. I love that we can arrange matches as often as we want to play. It's just a matter of finding people with availability! There are so many priorities people have that trump a tennis match by a mile, and understandably of course- so you end up getting a lot of cancellations. One week I had 5 matches scheduled and 4 cancellations! Which is part of the reason that I set up so many in the first place ;)

A match that really sticks out in my mind was a 10-game pro set I played with a woman who was honestly a lot more skilled than I am- she'd been playing since childhood and was now in her 50's, and was still in amazing shape. While I'd just started playing the previous year (aside from the 2 month stint in Greece), when I bought a Groupon for 6 tennis lessons out in the burbs. The score got up to 0-8. I was sure I was toast! Then somehow. Through some miracle. I came back to WIN at 10-8. I somehow won TEN games in a row. It was truly an inexplicably miraculous come back. She was stunned. And was happy for me bc she could see how hard I worked for it. 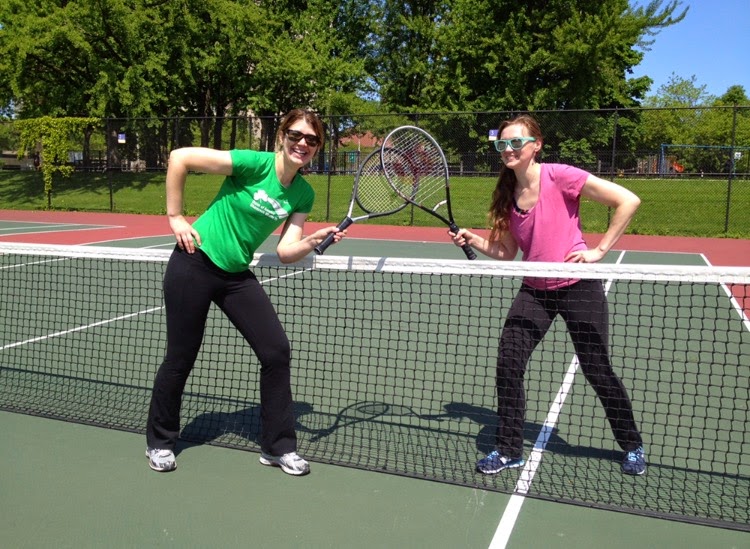 The other match that sticks out in my mind was with a woman who just moved to Chicago, and was a brand new player to the league this past summer. She was very skilled, and talked about how she takes lessons, has been playing for a really long time, that I should take lessons to avoid hurting myself, etc. She was really nice. Then as soon as we started playing, she was a different person! She argued about calls, she wouldn't speak to me aside from announcing the score- which she also fought about- and she had me running all over the court chasing balls like a crazy woman, because she was pretty good and I could barely keep up! She was winning for a while, but then her luck changed, and I made a come back! There was ONE more point left to play in the set before I would win (admittedly it could have gone either way, as it always can, and she could have won, too of course). It was her serve. Just before she served the last point, she said "I don't want to play anymore." Just like that! And forfeited the match. It was such an extreme and obvious case of her being afraid to lose that i couldn't even be mad out of sheer ridiculousness! I can see where it will be hard to lose to someone who's only had 6 lessons from a Groupon deal, and a couple months playing with kids in Greece lol.I know this story doesn't highlight the joys of tennis. But it's a real story that reveals the other side of intramural sportsmanship. It happens. Matches don't always end up with a cordial handshake and a cherry on top. And let's not be afraid to talk about it! It's an unfortunate part of life, but it's how you handle these moments that really make the player :) 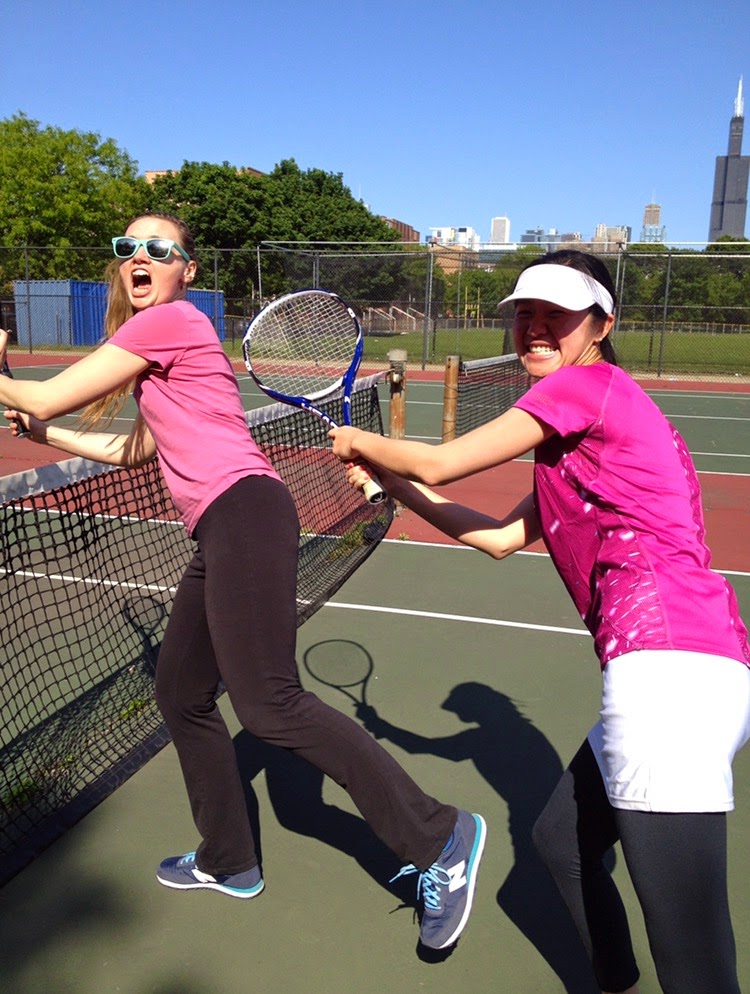 I believe the league has me ranked at 3.75. But the league's ratings seem pretty "padded" compared to the USTA ratings, where I'm probably closer to a 2.5.  Admin Note: Tennis League Network's philosophy is to follow the results as they are reported and get players into the right level as soon as the results dictate. Even during the middle of the season.

I'm the one in work out pants with the terrible Walmart racquet and running shoes from 1997 lol. This was before I reluctantly transitioned to tennis clothes haha. And I basically stopped taking pictures after that. I resisted tennis clothes for like 2 years, insisting on wearing cheerleader shorts and yoga pants, just to make a point. I am one of those people that believes it's not the equipment that makes a player. And I was determined to prove it lol. But tennis clothes are literally designed to hold tennis balls (duh), which is unfortunately really convenient, so I gave in!