In order to really dominate your competition, you’re going to need more than a powerful serve and flawless ground strokes. You need to be able to get to the ball, fast!

This requires a player to develop speed and agility so that they can react quickly enough to reach any ball that comes in their court.

Here are 4 great drills that all players must complete:

This drill helps to develop foot work by forcing players to properly transition for forward to lateral movement. This drill can also be performed while being fed balls from a partner.

1. Set up 3 cones along the base line, one in the center and two where the baseline and singles line intersect. Have the trainee stand towards either end.

2. If desired, have someone on the opposite side of the court feed the ball to the opposite end where the player is standing.

3. The trainee should start by doing a lateral shuffle towards the center cone, and once that center cone is reach they can turn into a sprint to reach the ball.

4. The player can return the ball with either a forehand or backhand.

Perform: 3 sets of 10 repetitions (1 repetition being crossing the width of the court) Rest: 1 minute between sets, as little as possible between repetitions

This exercise will enhance agility reaction time in trainees by forcing them to respond quickly to commands:
Perform: 3 sets (30-60 seconds of movement). Rest: 1-2 minutes between sets 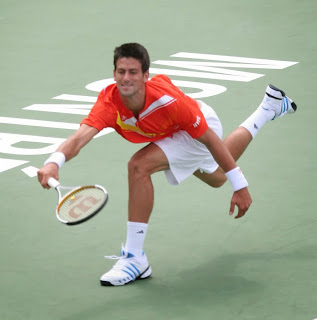 Players must be able to quickly chase down drop shots in a match. This drill will force them to quickly locate and reach any given ball.

2. Have the partner hit a light drop shot on the player’s side of the net.

3. The trainee must then sprint to return the drop shot allowing only one bounce.

This is a grueling exercise that will really wear someone out. It is best done at 95% of full speed. Because this exercise is so draining, save it for the end of practice or workout session.
Perform: 2-3 sets Rest: 2 minutes between sets