The Best Footwear for Grass, Clay, and Hard Courts

You may have noticed that many of the world’s top tennis players combine their playing style with the court on which they are competing on. Some are hugely fond of a specific type of court, with grass, clay and hard courts featured throughout the ATP World Tour and at some of tennis’ biggest competitions, such as the French Open, the US Open and Wimbledon. 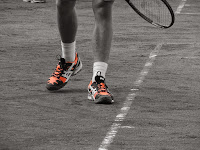 Rafael Nadal has had notable success on clay courts in the past, while current number one Novak Djokovic has now won five Australian Open titles which take place on hard court surfaces. Experienced tennis players will tell you that one of the most important aspects of your game when competing on varying court surfaces is your footwear. While top payers change their style to suit a specific surface, they also make a habit of changing their shoes.

If you study the movement of the ball at one of the four major tennis tournaments, you’ll notice some interesting differences. Wimbledon is played on grass which causes the ball to stay low and flash off the surface of the court. On the other hand, the movement of the ball at Rolland Garros is very much determined by the bounce effect caused by the clay surface. This means the game speed becomes a lot slower to accommodate the bounce.

Tennis players have to change their game to adapt to the surface, which is why footwear plays an essential role in improving your game. To ensure you’re fully equipped for all types of tennis surfaces, here’s a guide you can use when shopping for tennis footwear.

The Best Footwear for Grass Courts 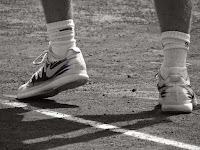 Wimbledon has always been a tournament for the big servers. The likes of Pete Sampras, Andy Roddick, John Isner, Jo-Wilfried Tsonga and Juan Martin Del Potro have all flourished at Wimbledon in the past thanks to the quick grass surface. The serve and volley style has thrived at Wimbledon over the years with players taking full advantage of the surface to race to the net after a serve. All this movement requires footwear with excellent grip, flexibility and a falter out-sole.

The grip is vital as grass courts can be quite slippery. Grass courts tend to wear out over time and they also attract plenty of due, so there’s always the chance a player might slip and suffer injury if they aren’t using the correct footwear. In order to not wear out a grass court, a flat out-sole is required. You are required to wear completely flat shoes when competing at Wimbledon. The flexibility ensures you aren’t restricted of movement when having to dash across court for a return or volley.

The Best Footwear for Clay Courts

Clay courts cause the ball to bounce higher, thus resulting in a much slower game compared to Wimbledon. The clay courts at Roland Garros often host a unique baseline playing style, commonly adopted by Rafael Nadal. The slow court gives Nadal the option to unleash powerful shots from the baseline. You’re most than likely to be moving regularly from side to side when playing on clay courts, which will demand excellent grip, durability, lateral support and a well-designed out-sole from your footwear.

You get very little traction for clay courts, so a strong grip is vital. The well-designed outsole keeps clay off of your grooves and doesn’t mark the court, which can potentially save you from injury. The durable sides ensure your shoes won’t be damaged from constantly sliding from one side of the court to the other. You’ll also need lateral support when moving in this way.

The Best Footwear for Hard Courts

Hard courts are often regarded as being neutral ground, with the bounce and speed of the play very much in between that of the effects of clay and grass courts. Many different playing styles can perform well on hard courts, but it’s still essential that you have the correct footwear to ensure your playing style reaches top form. Most hard court footwear requires cushioning, a tough upper and a tough out-sole. 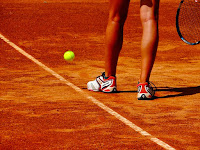 The toughness and durability of the out-sole is vital if your footwear is to handle the harder surface. You don’t want your trainers gradually deteriorating as the match goes on. Hard courts can cause plenty of stress on your legs and knees, so having that cushion from your footwear can help to prevent injuries. You’ll also need stability from your footwear which can be provided by a tough upper, thus ensuring less constriction when moving around the court.