Benoit Benaibbouche, Tennis-Miami's very own French tennis phenom. Despite the French Open having wrapped up this month, Benoit has our full attention as he has been playing down in Miami for several years and has played over 200 matches! And he's loved each and every one of them. 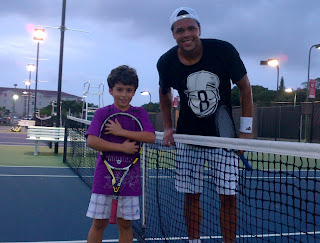 Here's a bit more about Benoit:

From a player I met at a tennis club.

Twice a week is usually my minimum.

I like meeting new players and facing new challenges. The organization as a whole is great, and I like the idea of competing with people who have the same passion about tennis.

It was a tournament final back in late 2012. We played in Key Biscayne—great court, great temperature, and a great rival—Nelson Machado. He is a fantastic player and I had never beat him before. I played my best tennis and won in straight sets. I pushed myself so much as I knew a trophy would be the most exciting award as my son—also a tennis a player—asked me to bring him a trophy… now it’s sitting in his room! 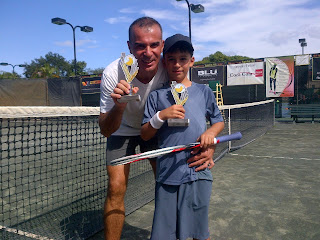 Honestly, all the players I meet are fantastic rivals. In general I love to play better players to step my game up.

Nothing except the fact that it really is the best. I wish I had more time to promote it more, but overall it’s a well rounded and great league.

Against a wall in my hometown Paris, France, in the back of a large parking lot behind the house I grew up in. It sounds like the stories of many big champions, I wish I was one of them! 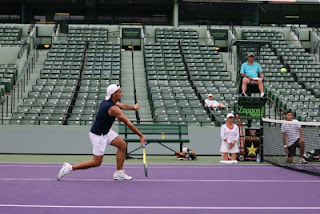 It’s a complete game: Physical, cardio, mental, legs, upper body, and the HEAD! And its never over until it’s over, unlike most other sports where they reach a time limit and the game is over.

I work in a high-end watch group, traveling in the Americas. French born, but I’ve been in the USA for over 17 years. I love traveling to tennis destinations with my wife and son who is a tennis lover too.
Posted by Unknown at 10:35 AM

Benoit is such a class act. He needs to make it back to our national tournament so he increase the coolness of the whole tournament. Keep up the great work on the courts!!

Benoit has been one of the coolest guys I've encountered through Tennis-Miami. I hope experiences like his have been similar to those of other players and I thank him for sharing them!

Benoit has been one of the coolest guys I've encountered through Tennis-Miami. I hope experiences like his have been similar to those of other players and I thank him for sharing them!