How to Dominate Your Doubles Matches 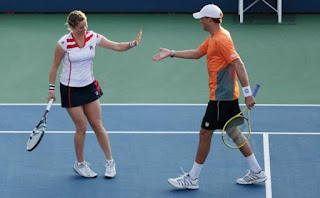 Playing a doubles match as someone who exclusively plays singles can be a significant change. Despite the rules being the same (with the exception of the doubles line), people often fail to adjust to the dynamic of a doubles match.

To really dominate your doubles matches, you need to work closely with your partner and adapt to this structure. Here are a few of the most important factors to keep in mind when playing:

It’s tempting to turn around at your partner when you’re posted up at the net. However, this is a poor habit. Your eyes needs to be on your opponents.

When your partner is hitting the ball, you should watch what your opponents are doing. They may be running up towards the net to hit a volley, or backing up to hit a powerful ground stroke. These split second differences may seem subtle, but in tennis they are very important.

You should be talking to your partner on a regular basis throughout the match. This is so that you can let your partner know where you are going, where they should go, what your intentions are etc.

If you’re not used to communication on the court, or don’t feel comfortable with it, start small. Perhaps let your partner know where you intend to serve.

Communication on the court doesn’t have to be limited to movement or technique—it can just be words of encouragement.

It’s also a good idea to avoid too much ‘teaching’ on the court. Technique is best honed during practice sessions, and people may take advice as criticism which will only diminish their play.

Going off the last point, because people play doubles with a close friend or significant other, people tend to shy away from giving out commands.

It may seem a bit uncomfortable, but giving out directions is crucial when playing doubles—this goes for both partners. If you can’t chase down a ball, let your partner know. If you think they should poach a return, tell them.

Know Your Role as the Non-hitter

During a singles match you’re going to be hitting every shot that comes on your side of the net, so if you play singles exclusively you may be tempted to chase down every shot. However, in doubles you have to determine when to take the shot, and when to let your partner get it.

This goes back to clear communication and taking charge. If you can get the ball, go for it. If not, tell your partner to chase after it.

When you’re not hitting the ball, and your partner is you need to be analyzing the court: Where is the weakness on your side, where are they positioned, where are you positioned relative to the ball etc.

Practice as a Team

The most dominant doubles teams are the ones that have great chemistry like the Bryan brothers. As siblings, they had many opportunities growing up to play tennis together. Over the years they learned each others’ strengths and weaknesses and have seemingly applied those to their game.

To really dominate your matches, you should minimize the number of partners you have. The more you play with a particular person, the better you two will get.

Looking to Play Competitive Doubles Matches in Your Area?

We have doubles leagues in many of our leagues across the country--from Baltimore, to Denver to San Francisco!

Check out the Tennis League website in your city for more details.