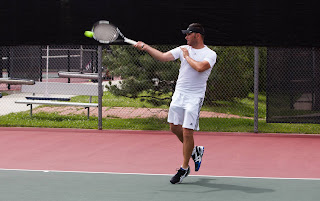 He's truly passionate about the game and plays every chance he gets.

This is what he had to say about tennis and his experiences with the league:

I am a member of Tennis Denver Summer 3.5 league, and spring mixed doubles with my wife as well. I just finished my Spring 3.0 league, and I won the championship.

I started in September of 2014, and I managed to play over 30 matches so far. With the rain in Colorado this spring, I'd say it is quite an accomplishment! With the whole summer league ahead of us, and fall too, I hope to play at least 50-60 matches this year.

I have 3-5 matches every week, plus I hit with my wife every time we don't have a match.

I like that there is a large pool of players to compete with. I like that admins are responsive. I love how easy it is to submit your scores - some other leagues require you to go on site and write in a notebook.

My favorite match must be my championship match last week. I played Will twice before and I won both times. I was sure that I could win again, but it was hot and I got very tired and my legs were shaking, and I managed to lose the first set in a tie break. I didn't break down mentally, and I managed to come back in force to a 6-0 second set, and I was able to finish it at 6-2 for the final set.

Who are your favorite rivals in the league?

I like playing Will and Derek in the 3.0 league, as they always give me a workout. Both of them are much lighter than I am and can run and put a racquet on almost every ball, and it makes for a fun game. I will see Will again in a competing 3.5 league through a local tennis center, so we will keep the rivalry going 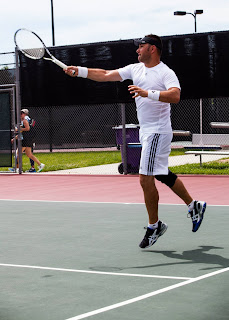 I won a drawing for a new racquet - just as I was starting to beg my wife to buy a new one, I won the Roland Garros drawing and now I have a new Head Graphene Speed MP Pro. Thanks TennisDenver!

I moved to states 16 years ago and I played for recreation with my dad a few times per year. Last year in July, my wife decided that she wants to play tennis because her parents were doing it, and that is when we got a personal coach for a few lessons, and I decided to join this league so I can play, as it is impossible to get "pick-up" tennis games.

I love the fact that it is a great work out - last year I lost 10 lbs playing it - I gained them back over winter, and I hope to lose them again this season. I love the competition aspect - it is one on one, and you can't blame anyone else for your mistakes. I like that you can pick up a racquet and play and improve your game visibly with repetition, and the satisfaction I get when I see how much better my serve is now than it was 9 months ago. I love the feeling of seeing that ball land where I intended it to go.

I love Novak Djokovic, as he is a fellow Serbian. I love his ground strokes, his playfulness, and how much he has improved over the last few years.

I am originally from Bosnia, and when the war started, I moved to Serbia. When the war started there, I moved to the USA as a refugee. I am a Server Administrator for the Cancer Center at the University of Colorado. I spend all my free time playing tennis or doing stuff with my family. We have to large dogs that are spoiled rotten and demand long daily walks, preferably at the Cherry Creek State Park where they can be off-leash and swim in the creek. I do like basketball, mtn and road biking, hiking etc, but most of my hobbies have been on the back burner any day the weather is nice enough to swing a racquet.