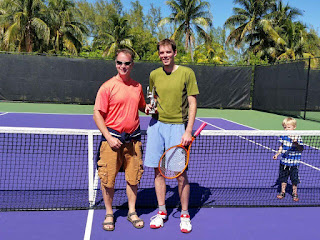 Jonas Persson, has reached the century mark, playing 100 games as a member of Tennis Philly. He's honed his skills a great deal since he started playing in 2010 and has developed a number of rivalries and has had several memorable matches.

He's a software developer by trade, originally from Sweden. and has two beautiful children. Here's a little more about him, as well as some thought and experiences with the league:

I've been enjoying the league since the summer of 2010.

I found it on the Internet. I had been playing with a friend for a while, but wanted to find more opponents (so I could play more often), and after browsing cyber space for a while I stumbled onto the site.

I would like to play twice a week, but with two little kids and a very busy wife, I play as often as I can, which vary depending on schedule. I think I average a match a week during the spring and fall.

The flexibility, getting to play against different styles, and, also, the competitive edge. I haven't played anyone but friends before, and I like to push myself to get to the play-offs, etc. It brings a little extra nerve to the match.

There are so many really fun matches. this spring I've played a lot of really tight 3-setters. I've lost most of them, but it's been some remarkable rallies, and a lot of fun. I love matches that go to a third set and with long, nerve-wrecking rallies (even if I lose them more often than not- something I'm trying to improve).

My most memorable match was probably against Jon Vanscoyoc, whom I have a 7-0 record against. Jon is a great guy, and we've had many competitive matches but I've always come out on top. This time Jon was determined to break my unbeaten streak, and for the first time it went to three sets. After two close sets, the third set went to a tie-break, and I think I saved two match points before winning with 6-4, 6-7, 7-6. I almost felt guilty afterwards.

I should add, that the vast majority of players in the league are excellent sportsmen. They are pleasant, and interesting to talk to between games, and, I have experienced on more than a few occasions, opponents calling their own shots wide while I've had a bad angle and offer them the point by the benefit-of-the-doubt method (if not sure, assume in or on the line).

I should end memory lane with another great memory, which was winning the End of Year tourney in Key Biscayne, Florida, last fall. It was so much fun to get out and play at these great facilities, and to be lucky enough to win it. I had come down with my parents as babysitters for my 4-year old son, and it was a great little vacation for all of us. I wasn't expecting to win a single match, because I had just moved up a division and was getting schooled most matches that fall, but winning was just a bonus. The real fun was to meet some great people, enjoy the weather and family, and to play tennis. It doesn't get better than that- so thanks!

Jon Vanscoyoc and Shaun Johnson are the players I've played the most. Jon is a great guy, and I'm a bit sad that we haven't played in the same league this year. Shaun I have a 3-3 record against. Every time I win, I walk away thinking I've broken the code, but he always comes back better than ever and beats me. I look forward to another close one next season.

Eric Fagin is another great guy to play. Fun rallies, and a really nice guy. Last match we played I was on the clock to pick up kids from daycare, but we decided to still go for a full third set. We tried to play quickly with short change overs, but the rallies just got longer and longer. It ended with me losing in a tiebreak, and getting back without a second to spare. 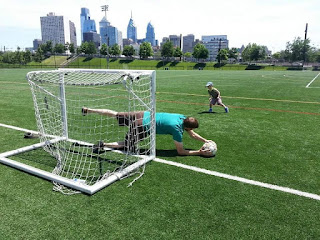 I played a little with friends when I was 12-13. We just played on a public court nearby and always five setters. Usually we teamed up and played the Davis Cup format of two singles, a double, and two more singles. Then I had a 15-20 year break before I moved to Philadelphia and found Tennis Philly.

I love how it's a sport I believe I can grow old with. The courts closest to me have an 85 year old man playing. He takes the bus the two blocks from his house to the tennis courts, and he doesn't move too well around the court anymore, but he still loves the game. I see all age groups play, and as my kids grow older I look forward to playing with them one day.

I also love that I can still improve my game. I watch YouTube instruction videos, and then go out and try to apply what I learnt. I've come a long way since 2010, and feel like I'm a much better player now compared to then, and I have tons to keep improving (and when my legs give out I have to adopt a less intense playing style, which will be a new challenge). Tennis is just getting more and more fun, and this spring season has been my best so far. Even though I have a 4-8 record I've been playing better and at a higher level, and I've had a fair chance of winning every match I've played.

I grew up in Sweden watching Stefan Edberg play serve-volley in Wimbledon. He's always been my favorite. Lately, I'm a Djokovic fan, and I like to watch Andy Murray's creative style when I have a chance.

Also, I'm following the progress of the Ymer brothers in Sweden. Mikael Ymer just lost the boys' Wimbledon finals a year before his last as a junior. Keep an eye out for him in the next few years to come :-) 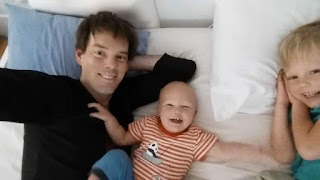 I'm a 37 year old Swede (born and raised). In 2002 I visited the US for the first time (Chicago) and found myself an American wife. I took her back to Sweden with me, but in 2007, we moved to Philadelphia. Since then, I have gotten two beautiful children, and found the amazing sport of tennis. I work as a software developer. I'm currently a self-employed consultant, which gives me great flexibility for daytime tennis (well needed since my evenings are usually dedicated to bedtime stories and making sure everyone eats their dinner).