Tomokazu Sawano -- An Expat Who Fell in Love with Tennis Tomokazu Sawano, came to the United States nearly seven years ago. After getting a taste of the 'Big Apple' he found that tennis was a popular sport that would give him plenty of joy.

He is likely going to be leaving the USA soon, but hopefully he can play a few more Tennis League matches before he's gone.

Here is what Tomokazu had to say about tennis and his life in New York:

About two or three matches a week. At least one over weekend and one or two more on weeknights.

1) It makes me feel like being a tour pro (albeit just a wannabe) by playing on different courts every time depending on each opponent's preference. Indeed, I have played at 119th Riverside, 96th Riverside, Central Park, Inwood, Astoria, Flushing Meadow, Lincoln Terrace as well as my home court East River Park.

2) Opportunity to face diversified players with different styles and to learn through matches with them. I'm learning and progressing very very slowly. At first, I was a very simple baseline flat stroke player who never went to the net or hit slices. Then, through many matches I learned by going to the net to volley on a right occasion gave more chances to win a point. And then, through fighting many good slice hitters, I learned that I couldn't defend against them well unless I got to slice back these shots. Right now I'm trying to figure out how to tackle tough top spins and kicking serves, but cannot find an answer yet.

3) Capability to post and store all personal match records. I only wish they also kept past league standings and playoff brackets.

1) A match when I won coming from behind 1-6; 7-5; TB 10-8. That was against a far better player and I still remember my final winning shot netting onto the opponent side.

2) Two matches where I blew 5-0 game leads (one I fended it off but another one I eventually lost the set) Ever since, however many games lead I get, I stay very nervous until the final point.

Wendy Ham. As our face-to-face records simply tell (5W-5L as of June 2015), we are pretty much equal and we always have a very close match until the end which itself is very exciting and soundly nail-biting. She is very tactical and effectively changes her approaches over the course of a match. She learned and executes "Winning Ugly". We have other shared interests such as golf, and so far our face-to-face records there are quite lopsided in my favor.

It's very fair that the organizer promotes and relegates players between divisions. Personally it stings sometimes. In a season I had very good (maybe too good) records in 3.0 division and started to envision the championship. Then suddenly after another (5th actually in that season) dominant win I was promoted to 3.5 division mid-season and I totally lost advantage. Kind of naturally I lost in the first round of the playoff.

Wendy Ham showed me the trophy she had gotten in women's division and I really really missed one. (Actually the eventual winner of that 3.0 division for the season turned out to be a very good player (3.75 caliber now) so probably I would not have had big chance to win the trophy anyway.) Disclaimer: this is not a complaint at all to the league! 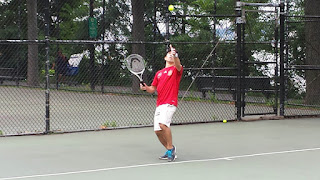 I just started in 2009 in my early 30s and thus I've never had integrative lessons / training and my playing style is self-developed. I was always playing soccer until my 20s but when decided to move into the US, I somehow thought it would be hard to keep playing soccer in the US (which I later found wrong) and started thinking that tennis was more easily accessible in the US and was a good alternative as an exercise.

After moving into the country, I was lucky enough to have a colleague living in Princeton NJ in a apartment with free tennis courts for residents. He also showed interest in tennis and we started to play every Sunday. In 2010 I found an online tennis meetup in NYC and started playing there instead of travelling to NJ. And then in 2013 a friend who likes tennis moved in and we started to play single matches every week, having myself find a fun of single matches. Then, that devotion culminated with joining the league in 2014.

An opportunity to put myself in a mentally very pressured / nervous state in a single match, especially in a close one, even if in a casual (not an official) match. Sometimes the pressure takes its toll on my mind but that's something special and I cannot often experience it in my daily life or at work.

Also, as opposed to soccer, tennis is an individual sports and every point/game/match is on myself. I just love that responsibility.

I'm an expat employee since 2009 from a major Japanese metal manufacturing company as Treasurer and Secretary. Getting a chance to work in the US, I've always tried to find opportunities to get friends with ordinary Americans besides my work and the league is helping me a great deal in that regard. As a temporary (albeit it past 6.5 years) expat, I will be most likely to return to Japan late in 2015 and will certainly miss the league (and the country).

Besides tennis, I started to avidly play golf since 2013 and it often conflicts with my weekend tennis schedules. I'm trying to balance them out as much as possible, and I believe I'm doing a good job mostly by planning more tennis matches on weeknights.