How to Improve Your Backhand 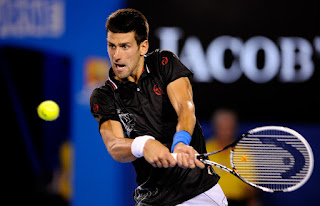 Although the backhand is a fundamental stroke in tennis, it still gives seasoned players a lot of trouble. Because it requires the use of our non-dominant hand for power and control, the backhand often pales in comparison to the forehand.

Though like any other shot in tennis, whether it be a serve or a volley, a powerful backhand is a learned skill. You should always be practicing your technique and practice hitting plenty of backhands with a partner.

Here a number of tips to keep in mind to improve your backhand.

The best place to start with your backhand is to analyze where your weaknesses are. For starters, try and notice whether the majority of your backhand shots that don’t go in either go long or into the net.

If you find your shots going long, make sure to keep the face of your racquet closed during the backswing. Also make sure you’re using proper grip (See Below).

If your shots are going into the net consistently, it means you’re not getting you racquet under the ball enough. This means you need to drop your racquet lower.

There really isn’t a definitive grip to be used on backhands, as it depends on what feels most comfortable for the individual. This means you should experiment with different grips to see which one is most effective for you.

Preparation for the Backhand

One of the reasons people have weak backhands is because they’re not active enough in getting to the ball: Their footwork will be slow, the racquet will not go through a full range of motion, and they won’t get a jump on the ball.

As soon as you recognize the ball’s position and you realize you’ll need a backhand, start moving your feet to where you need to be and adjust yourself. Then make sure to take a full swing back using the above-mentioned grip.

Have An Aggressive Mindset

Because most people don’t feel as comfortable with their backhand as they do their forehand, they tend to use the backhand as a push shot. This means that there isn’t much power on it; it’s simply a tool for getting the ball back over the net.

While the backhand isn’t usually as powerful as a player’s forehand, it still deserves as much attention. It should also be treated in the same manner such that more power should be put into the shot. By doing this, your opponents won't be able to anticipate your backhand as an easy shot.

And perhaps most importantly is that if a player only uses the backhand as a push shot, their stroke will never improve. This is why each backhand shot should be hit with focus and power.

The One Handed Backhand

The majority of tennis players use a two handed backhand. This is because it generates more power and people often feel like they have more control over the shot. It’s also less likely to give you tennis elbow.

That said, the one handed backhand is an acceptable shot. It is often more useful for chasing down balls, whereas the two handed backhand has a limited reach. What it really comes down to, however, is what you feel most comfortable with.