Keiji Tomita, is a 4 year veteran of the league, playing out of LA. Although starting tennis at a late age as a way to curb his 'bad habits', he has honed his skills and has become a true competitor on the court.

He is a restaurant manager of a Japanese restaurant, and also a guitar teacher. Here is a little more about him and his experiences with the league:

I like our league because there are so many good players and different style of tennis, and we can play with anyone with anytime, and as many as I want. At tennis leagues I played before Tennis Los Angeles, an opponent was already assigned, and only once a week.

It's a tough question, because there are so many matches I remember and that are memorable in many different ways. I'll just pick one, a match played one evening sometime ago. I lost the first set easily, and the beginning of the 2nd set, I injured my left leg, and I couldn't run. But I hate quitting for any reason, so I kept playing with one leg. At the end of 2nd set, the sun went down, it was getting darker, but the lights on our court were off!

Since it's dark and I couldn't see the ball, I suggested we stop playing and resume a different day. Knowing I couldn't move, my opponent rejected the offer and insisted he wanted to keep playing. So we kept playing, and somehow I took the 2nd set at 7-5. Again I asked if we should stop here, and his answer was "No". So next I asked if we can play a 10 point tie-breaker, his answer was "No". So I was forced to play whole 3rd set with one leg in darkness.

I was determined to play the whole 3rd set, I focused, refused to give in, and ended up wining the 3rd set at 7-6. He was furious after the match, saying, " I wanted to stop playing!" It was funny and comical at this moment. He really wanted to win. I am proud of this match in terms of my determination.

This is another tough question, because I have many favorite rivals. I feel it's unfair to mention just a few names here since I equally respect them, but if I have to pick one, I have to pick Valentin Ionescu-Tiba. We've played 34 matches so far, and will keep going.

One of the things I am proud of between us is that we've had no problems at all so far. I don't think we've had any disagreements at any single point. I accept his calls and he trusts my calls; it's a mutual respect. 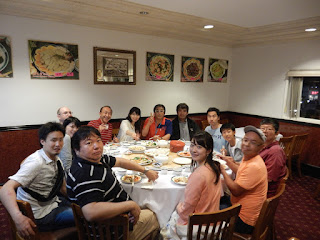 I have to say I love our league; I've met many good players and great people in this league. I am blessed.

I started playing tennis a little after I turned 30 years old. My boss initially taught me. He had experience teaching tennis in Japan, and one of his students was a coach of Kimiko Date, one of the top women pros back in the 90's. But I really got into tennis after I joined Tennis LA.

I am currently playing at 3.5. 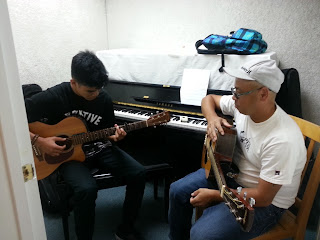 Kei Nishikori! If you are Japanese, there is no other option. Anyone in Japan recognizes his name now, he is a hero.

I was born in Japan and grew up there. I came to the USA for my college, and ended up staying here. I am now a US citizen. I also play and teach guitar professionally, and have worked at a Japanese restaurant as a manager for many years.