Shahin Jahromi -- It's Never Too Late to Pick Up a Racquet 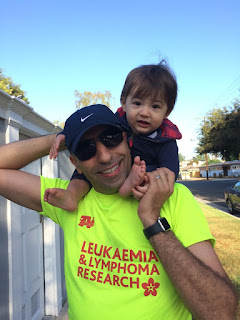 Here at Tennis League Network (TLN) we have a never ending supply of quality tennis players living and playing in Los Angeles. And with the fantastic California sunshine, this comes as no surprise. Today we want to feature one of the up and coming players out of this city, Shahin Jahromi. Shahin recently earned Veteran status here at TLN after having a busy 2015 and playing 25 matches.

Shahin hails from Iran where he first got his start in tennis. But after coming to the US for school, he stopped playing and has only started playing again in the last few years. Because tennis is a sport that you can play at nearly any age, there's no excuse not to start up again like Shahin.

I joined Tennis Los Angeles in 2012, but didn't really get into the league until 2014. I've played 3 seasons since then (took one season off when my son was born).

An old class-mate who used to play tennis with me told me about the website and the league.

Twice a week - Tuesdays and Saturdays. Sometimes I play outside of the league with friends, but that would be on top of the Tue-Sat schedule.

Variety. I feel like having to play against different players with different styles has enhanced my own game (vs. having played against the same couple friends that I used to before the league).

I really needed one last win last year to get to the playoffs, and I was able to schedule an evening match. My shoes were worn out so I decided to buy a new pair for the match, and I did so over my lunch break. My car broke down on the way to the courts, and I desperately asked my wife to switch cars with me.

I barely made it to the courts only to realize I had left my shoes in the other car. I played with my work shoes, and I still won!   Admin's comment: Now that is dedication!!!

I like quite a few. It's tough to name one favorite, as I take something away from almost every match. I could tell you that I don't enjoy slicers, i.e. it drives me crazy when all my opponent does is return my shots with slice forehands & backhands.

Observing players out-of-game habits is a favorite hobby of mine. How they greet me, their attitude when they lose, win, or during the short breaks. I often try to guess my opponents profession and life-style outside of the courts.

My dad took me to the courts to watch him play since I was 7, shortly after I started taking lessons.

It's an excellent work-out, and it also acts has a venting session for me. I find the post-game exhaustion extremely relaxing.

I grew up in Tehran, Iran and that's where I learned how to play tennis. I got to be pretty good during college, almost beating all the players I knew around me; I moved to the US to for graduate studies in 2000, and have lived in LA since then except for short breaks.

Upon immigration I took a 10 year break from tennis, and now work full-time, married and raising a 10-month-old. I'm trying get back in shape; maybe I'll be able to play as well as I used to, maybe I'm too old now; either way I can sincerely say playing tennis is one of the most joyful activities of my week, every week.