What can we learn from the Epic US Open Finals between Roger and Novak?

What can we learn from the Epic US Open Finals between Roger and Novak?    by Yann Auzoux

When Federer and Djokovic compete, you are certain to be in for a treat. The two players performed at the highest level possible for over 3 hours and mesmerized us with magical plays, extraordinary angles, and fascinating trajectories.  The two players in the end were only separated by 2 mere points (147 for Novak to 145 for Roger).
Besides the obvious exhilarating tennis excellence that was on display on Sunday night, the final score really boiled down to one simple number: Break Point Conversion.
Djokovic converted 46% of his break point chances and Federer fell short in that department with only 17% winning just 4 or 23 break point chances.  The final score was 6/4 5/7 6/4 6/4 in favor of Novak who broke Roger 6 times in 17 chances.
Obviously, breaking Novak at his best is not the easiest task to complete but what Roger had to decide each time is the same process all tennis players go through when in position to close a game.  Here are the three top scenarios to choose from:
Take a chance, Wait it out, Challenge the most obvious weakness
Take a Chance:
Taking a chance when you have several break points is a great strategy because the pressure is on your opponent.   You can go for a winner early or rush the net to force a passing shot. This strategy assumes that you get the chance to return the first serve in and last night Novak did a great job serving big first serves when he needed to get out of a sticky situation. He only had 3 aces but all three came at the perfect time.  That being said, Roger did have many other opportunities where he returned the ball in perfectly.  What happened?  In my estimation, Roger relied on the same patterns each time by trying to get into a rally and waiting for the right time to attack.  He never used his SABR attack once on break point or took a chance on the 2nd serve return. Rogers winner/unforced error ratio was +2 while Novak’s was -2.  In the end the “Patient choice“ did not work in his favor.
Wait it Out:
Waiting it out simply means to be solid and hold your ground.  You would return the ball in and play a patient rally without taking any blatant risks. This strategy assumes that our opponent would feel nervous and give away an opportunity to attack or make a mistake.  For us mere mortals, this strategy often works because we don’t handle our nerves as well as Novak.  Djokovic on the other hand is probably the best “Clutch” player the game has ever seen and waiting it out against him has never been a good choice.  Roger probably remembers well the last two times they faced each other in the US Open semis where he was up 2 sets to 0 two years in a row and saw key points in his favor disappear both times.  Looking at the stats, Novak won 54% of his own 2ndserve points and 54% of Roger’s 2nd serve points clearly showing that the Wait it out game was a better option for him.
Challenge the obvious weakness: 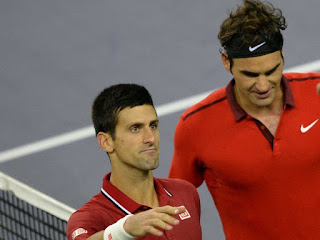 Off all the strategies available on break point, this is probably the smartest one of all.  Players at all levels have areas of their game that are less reliable than they would like.  For most recreational players, the backhand would come to mind.  Over the years, Federer had suffered some major losses because his opponents would challenge his backhand. Recently, Roger has closed that gap and turned his backhand into a very solid weapon.  Novak on the other hand has never been a natural net player and even though he is no slouch in that department, you always want to challenge your opponent with the least natural shot in their arsenal. The one strategy I wish Roger had used more was to force Novak to come to the net with a slice approach.  We all know how multi-directional and multi-dimensional Roger’s slice backhand is but I only saw him once force Novak to come to the net with a slice backhand which he capped with a beautiful down the line passing shot (with a little help from the net).  Looking at the stats, Novak won 66% of his net points which means that Roger won 44% of Djokovic’s net points.  By using these stats, Roger would have won 10 of his 23 break points turned the tide in his favor.
Next time you face a similar situation, make sure you keep in mind these three options and remember that your ability to win or lose is based on how well you convert.
Check below for all of the stats from the final. 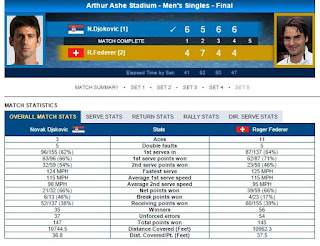 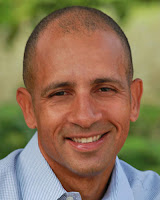 Posted by Steve Chagnon, TLN Lead Admin at 11:15 AM