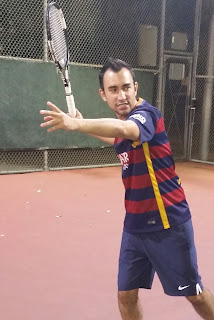 We wanted to feature a profile of Nikolas Buitrago to show his dedication to Tennis League Network after playing dozens of matches. So when we asked to learn more about him we were surprised to see that Nikolas does a whole lot more than dominate the courts: He dances, dives, swims and more!

He's also originally from Europe, having lived in Spain, France and Italy (No doubt he's had some jealousy from peers). He's also had the opportunity to see some tennis played at Roland Garros--home of the French Open.

If you want to find out more about San Jose's most interesting tennis player, read the interview below:

I have been playing in the league since June 2015.

My friend, Albert Gomez, highly recommended it since I was looking to play a lot more matches than the other leagues I had joined. He was right, I found a lot more players as eager to play as me.

My work schedule isn't easy as I work on weekends and have to get creative finding time to play during the week. I try to play 3 matches a week, but if I had the time I would play double that!

I love the rematch idea! It's great to be able to play against opponents you had great fun with or simply want to get another shot at beating them. The playoffs, of course, the pinnacle of the competition, are great, too.

It's funny because, the 3 matches that come to mind are all losses to really good players. My losses against Geoff, Tam and Andre were all matches that pushed me to focus on what I need to improve. That's what I love so much about this sport: losing and then having to work up a strategy; a game plan; having to dig deep and find a way to beat your opponent. It's like trying to crack a code or solve a puzzle. 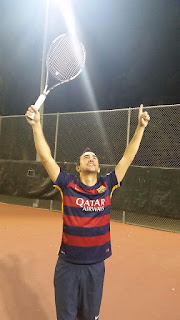 I have so many rivals I like...and that is another thing I like about the league. There is such a variety of styles and a large draw of players to compete against. You rarely will have enough time to play against every single player in your draw. There is also a wide variety of levels that makes it really interesting because you never know who can upset who.

Do you have any other interesting comments about your experiences with the league? The players are really friendly and accommodating. I rarely have any problem finding someone to play against.

At age 15, I took some lessons and loved it. I watched a ton of tennis and wanted to imitate all of my favorite players of the time.

I love to compete, one on one, where the only person I can rely on is myself. Win or Lose, it's up to me. I love how cerebral the sport is and how physically demanding it also can be. A lot of people don't realize how much technique, proper movement and a positive mentality goes into playing tennis. 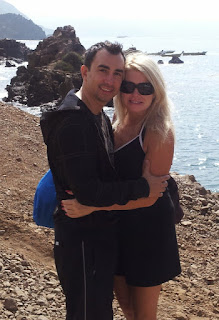 I have so many...My first idol was Pete Sampras. I tried to imitate every tiny aspect of his game. A lot of people would give me praise on how well I could imitate him, but unfortunately I wasn't nearly as good of course.

When I first started playing, I would serve and volley all the time, and I would get my butt kicked most of the time as well. Nowadays, I have an admiration for a lot of different players and different aspects of their game and I try to adapt them to mine.

I grew up in Europe. I lived in Spain, Italy and France. I have great memories going to watch pro tournaments. One of my favorites is Roland Garros, I got to see a lot matches there.

I have a lot of hobbies: art, salsa dancing, swimming. This year I also picked up scuba diving. I have a lot of different interests and I am always looking to try something new and exciting.