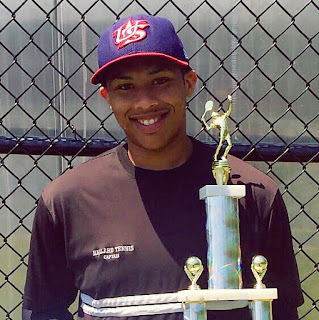 Nelson Cooper —joins us today from the Pittsburgh Tennis League. He is fresh off an excellent season with a championship victory to boot!

Before we get to the interview, we’ll let Nelson tell you a little about himself:

Since moving to Pittsburgh, I have tried to get as involved in the community as possible. I currently play on two softball teams as well as a flag football team in addition to playing tennis. I also am involved with two non-profit community service organizations; the Pittsburgh Pirates Charities and Ozanam, Inc. The latter is a non-profit organization that strives to serve underprivileged youth in our communities who are “at-risk.” The goal of the program is to develop youth into academically prepared and responsible adults by offering a safe and healthy environment for them to learn and grow.

Hi Nelson, and thanks for joining us. We want to share your thoughts and experiences playing in the Pittsburgh Tennis League, a division of the Tennis League Network franchise, and to learn a little more about you. Firstly, how long have you been playing tennis? What got you started and what has kept you going?

I was a big fan of tennis when I was little. I really liked Andre Agassi and Roger Federer. My godmother bought me an Andre Agassi tennis racquet when I was about 10 years old. We would go to the park and play during the summers and I would do some tennis camps at the Amy Yee Tennis Center in Seattle, Washington. When I got to high school my godmother and mom urged me to sign up for the tennis team since it was in a different season from baseball. I did and ended up playing four years of varsity tennis at Ballard High School in Seattle.

There are so many things I love about tennis. but if I had to choose just one thing I would say the strategy component of the game. You always have to be thinking - from knowing quickly where to position yourself on the court) to choosing the right shots. That, combined with the ability to play for a lifetime, make tennis the best sport in my book.

I am member of the Pittsburgh Tennis League. This spring I competed in the 3.5 Competitive league and this summer I am competing in the 3.5/4.0 Advanced and Competitive League. 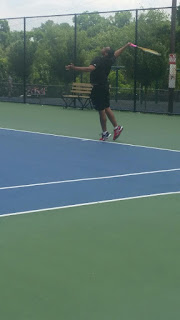 I started this season at a 3.0 due to the almost four year break in playing competitive tennis. I have progressed quickly and am now a 4.0 player.

This is my first year in the league! Hopefully it is the first of many seasons. My goal is to play and win the most matches in Pittsburgh Tennis League history.

Prior to finding the league, I played baseball in college for three years and graduated from college a semester early in December of 2015. As soon as I knew I was moving to Pittsburgh I started looking online for tennis leagues to play in as I wanted to get back into the sport. I’ve always said that I played baseball because I was better at it but tennis is my favorite sport to play. Upon searching “Tennis Leagues in Pittsburgh” on Google, the link for Pittsburgh Tennis League appeared first. I read about the league online. I emailed the admin and asked a few questions and the rest is history!

How often are you playing, in general and with the league?

I try to get on the courts at least three times a week. From matches to just hitting around with a partner or simply practicing serves by myself. When it’s nice outside there is no excuse not to work on your game!

What do you like about PittsburghTennisLeague.com & Tennis League Network?

There are two things that I like most about the league and they go hand in hand. First is the flexibility the league allows players. It’s nice to have a tentative schedule and coordinate with others in order to find time that fits both player schedules.

Second is the league app and website. This is by far the best digital tool out of any sporting league in which I’ve ever played. Having a full list of names and contacts as well as profiles really creates a community feel and gives players an opportunity to meet a lot of new people. The functionality and website really do a great job at ensuring players are finding hitting partners and getting on the courts as much as possible.

Now that you’ve played a couple dozen matches in the league, would you consider any of your Pittsburgh Tennis League opponents rivals?

Due to my status as a newer player in the league, I have not yet created an intense Rafa v. Federer rivalry with anyone yet. I have only played four players more than once. As of now, I would have to say I my greatest rivalry is with Dmitriy Sulik because both matches we have played have been very high quality tennis. I also do some hitting with Dmitriy as well and he is a has helped me improve quickly.

Do you have any memorable matches since starting with the league? 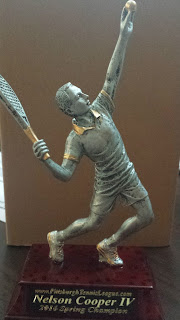 The most memorable match I had this season was against Michael Aitken early in the season. Both of had just been promoted from the 3.0 to the 3.5 league and we were both undefeated. It was a very hot day and I forgot to bring a water bottle! Not only did I forget, butt the courts we played at had no water fountains! I got up to a big lead in the first set but then hit a wall as the affects from a lack of hydration started to set in. I was able to hold on and win the first set but then got crushed in the second set. Finally, I asked my opponent, Michael, for some of his water. The three sips of water I had from his bottle rejuvenated me and I was able to pull out the third set. It was real battle of attrition. Thankfully I had some of “Michael’s Secret Stuff” to help me pull out that match (Space Jam Reference). .

My favorite male tennis player, and favorite athlete in general, is Roger Federer. He simply is the greatest. So smooth on and off the court. It seems as if he is always in control and can keep his cool in any situation. The grace in which he plays the game as well as the grace he shows off the court through charity is very admirable. I’ve always used the same equipment he plays with (even if it may not be the best for my game!)

My favorite female players are Venus and Serena Williams. The adversity they have dealt with on and off the court while maintaining an extremely high level of tennis is unbelievable. Along with the barriers they have broken down for African American’s as well as women across the globe, they truly are living legends

Nelson, this is great stuff. And thank you again for taking the time to do this interview.