Bimal Patel - 100 Matches played, now that is a milestone 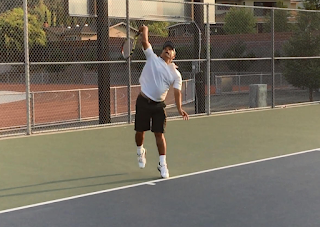 This month we caught up with Bimal Patel out of the TennisSanJose.com tennis league.  In just 2 years time he's already played 109 matches one of the fastest growing leagues in the franchise. It's players like Bimal that attracts other active tennis players to help build this community.

He celebrates his improved my physical and mental (yes!) fitness through participation in the program.   We celebrate his great sportsmanship and ability to schedule so many matches in such a short period of time.
Bimal's League Profile

How long have you participated in your league?
Continuously, since Fall Season 2014

How did you first learn about it?
Stumbled upon it on google search.

How often do you play?
2 times a week, wish I could play more.

What do you like most about the league?
Flexibility & convenience. Gives opportunity to meet lot of interesting, fun players to play with.  Thanks to the league, I have made many new friends who are not just good athletes and tennis players, but nice people too.

Tell us about your most memorable match(es)
There are many, but this one stands out.  Remember playing Stephen last Spring Season 2015.  We played 3 grueling sets, pushed each other to mental and physical limits, match lasting almost 4 hours !  I had several chances to close out in the third set, could not and lost 2-6, 6-4, 7-5. Even though I lost the match, I felt good, having given all all I had, against a good player and nice gentleman. 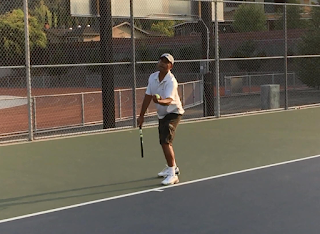 Who are your favorite rivals in the league? Why?
There are so many .. it's always fun to play with Arun, Patrick, Jason, Len Tran and many others. Win or Lose, they always bring the best out of me.

Do you have any other interesting comments about your experiences with the league?
After joining the league, I feel I've vastly improved my physical and mental (yes!) fitness. While playing opponents in the league, I always find myself thinking, analyzing, problem solving, trying to find that extra edge to do better. Even if I lose, I feel like a winner having had a nice cardio workout.

How did you get started playing tennis?
Started late at 31, hitting on the wall at local Mountain View courts.  Played off and on, for some reason stopped for 10 years.  Thankfully, I found San Jose Tennis league.  I wish I'd found the league sooner!

Who are your favorite pro players? Why?
Rafael Nadal.  Because he plays each point as if it were a match point, never gives up. 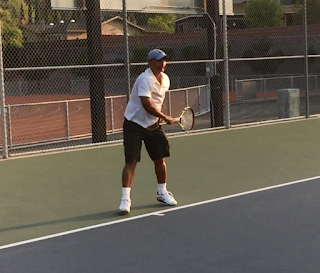 Tell us a little bit about yourself, for example: What do you do? Where did you grow up? What are your hobbies (besides tennis)? (Feel free to share any interesting details about your life.)
I work as a Software Engineer at a Silicon Valley firm.  I grew up in a small township outside of Baroda, India (4-5 hours north of Mumbai).  I never held a tennis racket (let alone play) until I was 31, but did play badminton as a kid which helped me pick up tennis.  I am an avid sports fan and follow most sports. Besides tennis, I love reading, watching good movies, hiking and spending quality time with family and friends, including my classmates from high-school who I reconnected after 40 years - we encourage each other in following our passions.
Posted by Shiful Alam at 3:02 AM