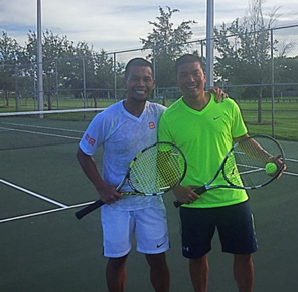 We checked in with Nate Pualengco whose playing out of the Miami League.

I am currently a member of the Tennis-Miami League.

How long have you participated in your league?
I found out about the league through a web search earlier this year.  I started out as a novice in the partner program and the tennis ladder to get a few matches going and I eventually signed up for the competitive league in March 2016.

How often do you play?
I am quite active in the league and try to play three to four matches a week.  I am also strength training as part of my fitness routine so typically I’d play tennis Monday, Wednesday, Friday, and work out on Tuesday and Thursday.  I rest during the weekend (body needs some R&R, too!)

What do you like most about the league?
This is the first competitive tennis league that I’ve joined ever.The guys I’ve played are competitive and they also have fun at the same time, and to me, that’s the most important thing.  Win or lose, it’s all about having a great time and improving your game.  The system is pretty organized and the variety of programs offered through Tennis Miami appeals to all levels.  There’s something for everyone who are looking to play the sport!  Also, I really like the incentives that are offered such as the playerof the year program, referrals, partner contest, etc.  Great motivation to continue to be an active member of the league.

Tell us about your most memorable match(es).
I’ve had a few memorable matches since I joined the league in March.  The most notable match I’ve played was against Pablo Lorenzana.  Prior to our match, he had a 5-0 record and I was coming in at 2-3.  I was in a slump at that time having lost 3 in a row.  For a newbie, that losing streak was tough.  I have heard about Pablo from other players so I was a bit apprehensive that he would give me my 4th loss, especially he was undefeated at that time.  We started the match and right off the bat, I had trouble adjusting to his style.  He’s a lefty with a nasty slice serve that is very difficult to return.  Took me a few games to figure out how to work around his game.  Surprisingly, we found ourselves in a tight first set.  We actually went to a tiebreaker that fortunately went my way.  Huge relief having won a set, more so against a darn good player. I started off the second set very strong.  I remember I was up a couple breaks and if memory serves me right, I had him at 5-1, and all I had to do was close it out.  Then I lost focus and he started to rally back. Panic started to set in and he did manage to tie me at 5-5.  I knew I had to regain concentration so I played the last two games one point at a time.  It was quite a struggle but the tennis gods favored my game more and I picked up my 3rd win.  Pablo was a very tough player and he showed great sportsmanship. This match was memorable for me not only because of the level of competitiveness, but also because it gave me the confidence I needed to keep playing.  Plus, I was the only player that Pablo lost to during the spring league.  I kind of played the role of a spoiler for him.  J 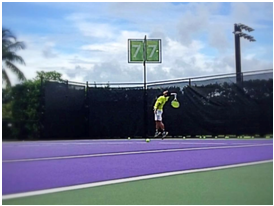 Who are your favorite rivals in the league? Why?
Right now, my favorite rival is Miguel Morejon.  This guy is so passionate about tennis and plays so much.  We’ve met a few times in the spring and summer seasons, and our matches are becoming more and more competitive.  He has figured out the weakness in my game so now it’s up to me to turn things around and keep the friendly, yet competitive rivalry going.

Do you have any other interesting comments about your experiences with the league?
Having lived in Chicago for 20 years, the transition to the heat and humidity of Miami has been a bit challenging for me.  I’m still trying to figure out how to best accommodate playing under these conditions without cramping and getting dehydrated.  This is why I joke around my opponents before we start the match.  I tell them that I’m not a big fan of the third set.  It’s either I win in two, or lose in two. The shorter the match, the better (at least during the summer)!

How did you get started playing tennis?
My brother and I used to watch a lot of tennis when we were younger.  We grew up watching Pete Sampras, Andre Agassi, Goran Ivanisevic, Michael Chang, Serena Williams, Martina Hingis, Steffi Graf, Arantxa Sanchez-Vicario just to name a few.  We loved these pros.  We would watch tennis matches during the day, then we’d go to a nearby court and imitate the pros!  That’s pretty much how I started out with tennis but all of it was just recreational matches.  The Tennis Miami league gave me the opportunity to play at a much competitive level, which I have never ever done before.  When I started playing with the league, I knew I had so much to learn and improve upon in order to compete.  I didn’t want to make a fool of myself on the courts.  The more I play with people, especially the ones better than me, the more I learn and pick up tips/techniques on how to become a better player.

What level player are you? (NTRP rating)
Started out as a 3.5 player in the spring#2 league and now I have a TennisLeagueNetwork player rating of 3.75. 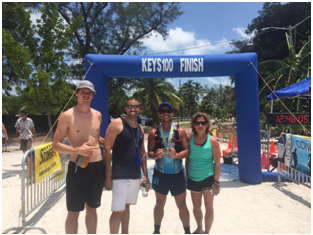 Who are your favorite pro players? Why?
I’ve always admired pros because of their skills and intensity.  My favorites right now are Rafael Nadal and Serena Williams.  I think they are exceptional players and are so tough, both physically and mentally, both of which are very important elements of the game.  I enjoy watching Rafa and Serena play their matches and I always look for opportunities to incorporate bits and pieces of their style into my game.

Tell us a little bit about yourself, for example: What do you do? Where did you grow up? What are your hobbies (besides tennis)? (Feel free to share any interesting details about your life.)
I’m 35 years old, lived in Chicago for 20 years and relocated to Miami with my fiancé, Danny, last year.  I work for Allstate Insurance as an education consultant.  Besides tennis, I love to run.  I’ve been running (racing) for about six year now and since 2010. I’m one of the crazies that run those ultra-marathons (races longer than 26.2 miles.)I have two 50Ks, four 50-milers, and seven 100-milers under my belt since I started running ultras in 2012.  I am a huge Cubs fan!  I have three fur babies at home, two senior female Pugs, and a male domestic short haired cat.