Samanta Fernandes: Hitting with the Men out in Orlando 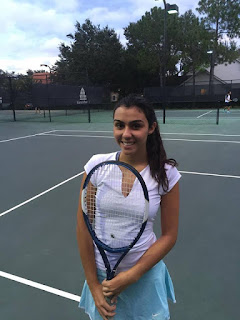 We checked in with Samanta Fernandes out of the Tennis-Orlando league. Here's what she had to say:

How did you get started playing tennis?  Tell us a little bit about yourself, for example: What do you do? Where did you grow up? What are your hobbies (besides tennis)? (Feel free to share any interesting details about your life.)

My name is Samanta Fernandes and I am 19 years old. I played tennis when I was younger because of my father. He loves tennis and put me and my sister in tennis classes when we were 7. We used to live in Brazil back then. Afterwards, we moved to Switzerland, Roger Federer’s and Martina Hingi’s country. There they have a great structure for tennis classes and tournaments. I played a lot and got really passionate about it. However, I stopped when I moved back to Brazil at the age of 14.

Which league are you a member of?
I started playing again here in Orlando in the Orlando Tennis League.

How long have you participated in your league?
I have been playing for 3 seasons already.

How did you first learn about it?
I learned about the league through google, doing some research on where to play tennis here in Orlando. When I read about the league I thought it would be interesting to play different people but I did not expect it to be as fun as it is.

How often do you play?
I usually play 2-3 matches a week.

What do you like most about the league?
At first, I thought I would be scheduling matches with people and that was it. But there is more to the league and as I learned more about it and how it works, it became more and more interesting. I realized that with a certain amount of wins (Usually 5) you can participate in the playoffs and if you win, you get prizes, entry to other tourneys and go up to a higher division. All of this motivated me to improve my game and get more involved in the league. I got more competitive and improved my mind game. 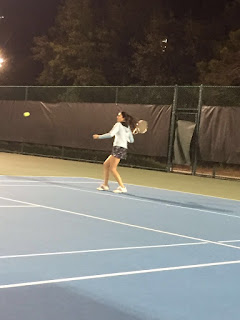 Tell us about your most memorable match(es).  Who are your favorite rivals in the league? Why?
I learned that the game is not decided until it is over. Two games that helped me to understand that were against two players; Regan Stevenson and Gary (Giri) Shankar. With Regan, I played at 4pm during a very hot day and I was exhausted. I was losing 5-0 in the first set and playing horribly. Normally, I would think that I had already lost that game and would play just to finish it or I would just give up. However, I told him to have patience with me because of the heat. I drank a lot of water and we waited a bit until it got cooler. We finished the set and I actually won in a tie breaker.

With Gary it was different. I won the first set and I was pretty confident. However, he started getting better and actually won the second set. We went on in the tie breaker, I believe he won 12x10. That opened my eyes to never relax and give my best until the end, because in tennis, anything can happen.
Gary is one of my favorites rivals, since he has won two times already. He challenges me with his game and it is really fun to play against him. 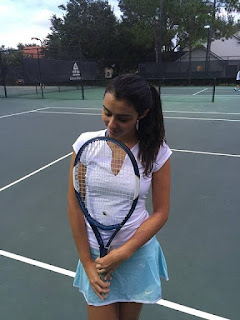 Playing in the league has helped to meet new people, improve my game and get me out there for new opportunities. As mentioned before it improved my mind game and it also improved my game.

One day I was playing at Lake Cane Tennis Center and they offered me to participate in a doubles tourney, which was really fun. Another day, I was talking to the receptionist in Lake Cane, waiting for my opponent to arrive and he told one of his coaches about me. The coach went and watched me play a little bit and actually decided to put me in a team, which is awesome. I appreciate the opportunities that came for me while playing in the league and I hope there will be more. Soon I will be transferring to UCF and look forward to trying for a scholarship there. The league is providing me with a lot of opportunities, experience and fun. I have been playing for three seasons already and I see more and more people participating and getting more involved. Also, many women are encouraged and participating more and doing well. I love to see the league grow and become more fun every season.

What level player are you? (NTRP rating)
I started as a 3.00 and now I am currently rated as Women’s Competitive 3.75.