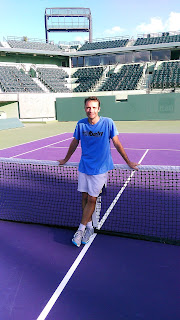 Which league are you a member of?
Tennis Miami

How long have you participated in your league?
I started playing in December 2015, so it has been exactly one year. Over the past year Luca has won 44 matches while only losing 21 and he plays in our top Elite Division.  His Profile Page.

How did you first learn about it?
I was looking for tennis leagues, but not in a very convinced way, until my wife found Tennis Miami online and told me: “you are getting bored playing socially, join this league!” In London, I used to play matches regularly, at least once a week throughout the cold and rainy season, and the less cold and less rainy season (once I played for 2 hours under the rain and another time it was snowing during a match, on a February morning in Hackney Downs!). So thank you, Efe, for finding this great league!

How often do you play?
On average, I played 1.5 times a week last year, typically once in the evening during the week and once at the weekend. I try to playing mostly when I really want to so that I am motivated enough, a key for having more fun! I keep myself reasonably fit with light gym workout and running so I can get to as many balls as possible and put them above the net & inside the lines.

What do you like most about the league?
I used to play with the same 5-10 players over and over again,but in the last 12 months I competed against 31 different tennis players in 61 matches! Amazing, because confronting guys with different style, ball pace and personality on the court does enrich my game. Tennis Miami is a very well organized league that really stimulates you to get out there to challenge yourself and great opponents. I feel pushed to get to clear goals, such as winning a tournament, beating better ranked players, or being among the top 5-10 players of the year (POTY). And the league values the more you win, but also the more you play, it’s about having a lot of fun in the end! and it’s easy to make new friends too.

Tell us about your most memorable match(es)
The 1sttime I played Giampaolo Guarino, we had such a tight match: I won 6-4; 5-7; TB 12-10, after almost 3 hours (March 2015). Ups and downs, attack and defense, a true roller coaster! More recently, I played another memorable match at Kings Creek South (nice courts, but bring your chair: no benches) against Luis Jimenez.He battered me 6-1 in the 1st set with his formidable forehand, but I hung in there, made my game more solid, and managed to come out of a close breaker 10-8 (I think) after saving match point, and then won the championship tie-break. One other time at Biltmore, I was winning 6-2 5-1 against David Rodriguez, and then tennis showed me what it’s all about: my opponent came back with some great shot making from the baseline, including Djokovic-like passing shots (not kidding) – I only managed to prevail 10-8 in the final long-format tie-break. It is so difficult to close out matches staying aggressive when it’s almost done. In tennis, it’s never over until the very last point! 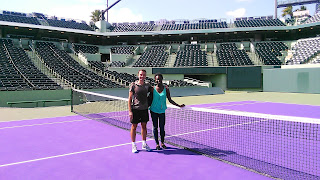 Who are your favorite rivals in the league? Why?
It’s difficult to choose, as I am having nice rivalries with Benoit Benaibbouche, Tim Aballo, Giampaolo Guarino, William Jimenez and Eduardo Sandoval. I played 5 full matches with Benoit, he is a great player with a complete game: better serve than mine, great volleys and amazing running and defense skills (and what a sliced backhand!). Last April, he beat me in the final at the Crandon Park center court under a scorching heat: my energy was drained after coming back from 2-4 to win the 1st 7-5, he regained the initiative and pretty much closed the door on me for the rest of the match. But I improved over the summer and won against him the next 3 times; he didn’t like that, so he beat me the other day in a very close 10 game set at Morningside. I also lost a final to Tim, but then managed to beat him the next couple of times – the last one being down for most of our 2 hr&45 minute match (6-7 7-5 10-7). Giampaolo and I are both from Italy, we’ve had three very close matches, all ending on a championship tiebreak (one with a few match points saved): lots of volleys, passing shots and lobs, which is a lot of fun! I played William 4 times: don’t go on his dangerous forehand!and Eduardo 5 times: very good volleys and serve. Benoit has a lot of experience and is able of turning matches around: there is a lot to learn from him, so I am going to nominate him as my best rival (so far).

Do you have any other interesting comments about your experiences with the league?
I love the fact that Tennis-Miami.com keeps all the records of matches & games won/lost (what about sets won/lost?) and even the head to head of the greatest rivalries. The league is GOOD VALUE FOR THE MONEY, and I am sure that everyone playing in it wishes they had even more time to hit tennis courts, and pretend that we are like the pros! J

How did you get started playing tennis?
I started playing with my dad at the back of a supermarket in his hometown of Como, played a lot against the wall in our garden and at the tennis center with my best teenage friends. I would impersonate Edberg, while Andrea was Lends and Alberto was Becker, I miss those times: back then we even played 3 out of 5 sets! 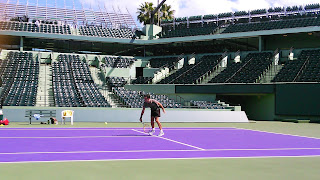 What do you love about tennis?
Tennis to me is like a physical and mental dance involving every muscle and every neuron: bend your knees, twist your torso, and flick your wrist to put that yellow ball exactly where you want it to go. But it’s more than that: it’s a metaphor of life.The more you believe in yourself, the more you can (and will)get to your goals.Winning is great and losing sucks, no doubt about that, but playing fair, respecting your opponent, and improving with your mistakes make you feel so good!

Who are your favorite pro players? Why?
Stefan Edberg, period. Because his unique elegance, amazing serve and volleying, and sportsmanship are a great example for all tennis lovers. I admire a number of today’s champions: Djokovic for his fighting &risk-taking spirit and stunning composure, Nishikori for his laser groundstrokes and clever tactics, Nadal (what a champion!), Tsonga and Berdych for their massive forehands. Roger Federer is the best of all, as long as anybody gets 18 Grand Slams (and maybe even beyond).