Player Profile: Geoff Lambrechts, he'd play every day if he could. 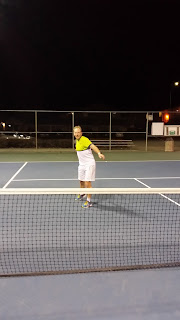 We caught up with Geoff Lambrechts out of TennisSanJose.com.

I’m a product manager for a small software company (50).  Fortunately, this company does have tennis players.  Just like everyone in the Bay Area, I wasn’t born here but came here from Europe 20+ years ago.  Besides tennis, I like to run.  I’ve ran 10K, half marathons, full marathons and 50K.  I think the running helps my footwork on the tennis court J  I also like to bike, both road bike and mountain bike.  Hiking is also something I enjoy.  I have hiked Mt Whitney and Half Dome among others…

How long have you participated in your league?
I have been with Tennis San Jose since 2014 and have played 125+ matches.  Geoff's Profile.

How did you first learn about it?
I learned about Tennis San Jose by googling Flex leagues in the bay area.

What do you like most about the league?
This league is better than the other ones in many ways.  First of all the majority of signed up players are motivated to play (not many flakers).  Second, you can replay someone 1-2 times depending win/lose.  Third, the staff of this league is on top of it and will respond to your emails very quickly.  Fourth, there are many leagues throughout the year.  Most other leagues have a really long time from the time the previous league finishes to the time the new one starts but not Tennis San Jose.

Tell us about your most memorable match(es)
I can think of one match that lasted hours.  We were both getting tired and every game went through add in/add out.  It seemed like it would never end.  I was playing someone who I had beaten before and should have beaten them faster but it was a playoff match so it was important and neither one of us wanted to give it away.  I eventually managed to take it in the tie break after we had been playing for more than three hours

Who are your favorite rivals in the league? Why?
There are so many! Ted Nguyen is one of my favorite players as he can place the ball left and right all day long and I just run left right left right…  We’ve played each other many times over the last two years and it’s always intense

Do you have any other interesting comments about your experiences with the league?
This is my favorite league as it’s the one that gets me the most matches.  There are many other flex leagues out there but many of them don’t have good staff and don’t have quality players.  By quality I mean people who sign up who actually want to play.

How did you get started playing tennis?
My mom plays tennis and got me started.  I started with tennis lessons when I was around 5 years old.  In my teens, I played maybe once a month.  It’s not until the last 2-3 years that I kicked it into full gear and started playing a lot more.

What level player are you? (NTRP rating)
My USTA rating is 3.5.  Unfortunately, I don’t play enough in USTA to be bumped up.  I consider myself a 4.0 player.  Geoff's TennisSanJose.com rating is Advanced 4.0.

What do you love about tennis?
I love playing tennis because it gets my mind to focus on tennis and forget about all the other stressful things around me.  I love the fact that you could win to a better opponent or loose to a weaker opponent.  You could have a really great day or a really bad day.  It’s very mental!  Sometimes I think it’s more mental than physical…  I love to meet players from different background and cultures.  Especially living in the Bay Area, people come from all over the world to be here, it’s always interesting to hear their story how they got here.  I’ve played players from the US, Canada, Mexico, Japan, India, China, Korean, Vietnam, France, Italy, Spain, Portugal, Belgium, South Africa, Argentina, and Jamaica to name a few…  I have also played players from different job backgrounds…