Admin's Note: I got to see an early release of this film and found it to be an eccentric and definitely for adults movie.   Certainly think this movie will be more enjoyable for most players in our program. Definitely rated R for language. 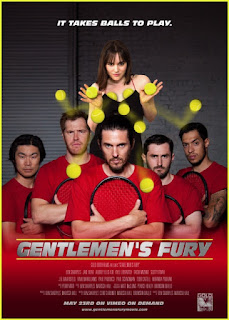 Gentlemen’s Fury, a comedy feature film about an ATP player whose Johnny Mac–like temper lands him in a league that might not be strictly about tennis, premieres May 23, 2017 on Vimeo On Demand www.vimeo.com/ondemand/gentlemensfury

Starring Ben Sharples (Flight 7500), Jake Head (Ted) and Audrey Ellis Fox (Law & Order: SVU), Gentlemen’s Fury is a cross between Fight Club and Dodgeball that makes a raucous commentary on the plight of the male tennis player, as well as tennis itself.

Sharples, who also wrote, produced, directed and edited the movie with his wife Marissa, has a long background himself as both a tennis player (he played on the UC Berkeley Men’s Team) and coach that lent itself well to the project.

“Tennis can be a maddening individual sport, and it’s also a sport that doesn’t get the love it deserves here, so a movie about a player whose temper lands him in a violent tennis cult seemed inevitable,” Ben jokes. 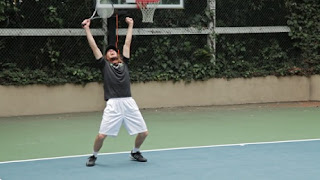 Gentlemen’s Fury will be released on Vimeo On Demand on May 23rd, right around The French Open no less, and kicking off the summer tennis season.

For more information and to watch the trailer, please visit www.gentlemensfurymovie.com