Nicolai Schwarzkopf: Exploring the city through his love of tennis. 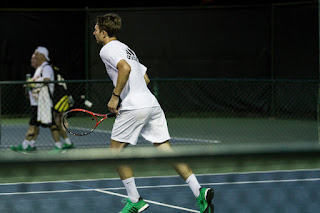 Hi I'm Nicolai Schwarzkopf. I'm a 28-year-old real estate developer from Atlanta. Since moving to New York in January, I have attacked the TennisNewYork.com (Manhattan / Brooklyn Tennis League) circuit hard, winning two championships in the summer league and the July tournament. I moved up from "Competitive 3.5" to "Advanced 4.0", and I have my sights set on "Elite". Then maybe Wimbledon, who knows...

I admit, I'm a little obsessed with tennis right now. Most weeks, my happiness revolves around tennis. I love playing around the city, from Central Park, to Queens, to along the Hudson river. The setting is always amazing and it gives me a special way to explore the city, as I ride my bike to and from matches. My grandparents introduced me to tennis at a young age. I enjoyed it, but I was more suited for football, which I played from middle school through college. Once football was over, tennis became my competitive outlet. I traded hitting other players for hitting a serve as hard as I can, then rushing the net and using my height to my advantage as I try to slam a winner. My style may not be as pretty as Federer's, but it's worked for me so far.

How long have you participated in your league?
I started with the summer season this year

How often do you play?
I try to play 2-3 times a week at least

What do you like most about the league?
I like the flexibility of playing whenever possible. It is usually easy to schedule a match if you send a mass email a day or two in advance.

Tell us about your most memorable match(es).
So far, it has to be winning the July Tourney against Shantanu Godbole. Shantanu is a really good player but for some reason, I hit every shot the way I wanted to that day, and I won pretty easily. I just felt "on" that day! And got a pretty sweet trophy as a result. 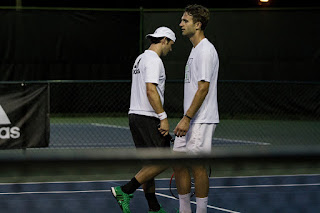 Who are your favorite rivals in the league? Why?
I wouldn't say I've played anyone enough times to warrant a rivalry. But the first time I played Harry Richardson, he beat me, and it disappointed me because I thought I should have played better. So when I played Harry again in the Summer Competitive playoffs quarterfinals, I was excited to get a chance at redemption - we played 3 sets and I barely won, but it was a great feeling.

Do you have any other interesting comments about your experiences with the league?
Would be nice to have more tournaments or possibly weekend round robins. I'm all about competition, although it's nice to play some "regular season" matches too.

How did you get started playing tennis?
My grandparents played, and I would go to tennis camps during the summers when I visited them in Savannah. So I learned the fundamentals growing up, then I stopped playing for about 10 years while I focused on football (which I played from middle school through college)
10. What level player are you? (NTRP rating)
4.0 (3.5 on a bad day, 4.5 on a good day) 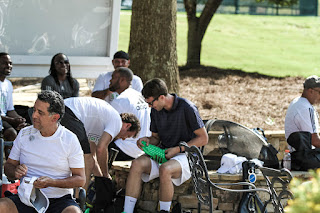 What do you love about tennis?
Who are your favorite pro players? Why?
Probably Federer, even though my style is nothing like his. I wish it was, because he makes the game look beautiful.