Ben Holland quickly played 27 matches since mid June and wanted to tell us about his experience.

Which league are you a member of?
TennisPhilly.com,  Player Profile 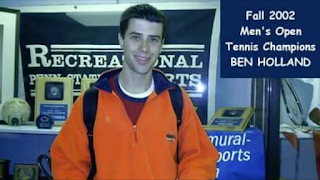 How long have you participated in your league?
Since start of summer session, 2017.

How did you first learn about it?
From a colleague referral, Sushil Sharma (also on the league).

How often do you play?
I play roughly two matches per week.

What do you like most about the league?
Access to many players in the area with similar skill level.  Also flexibility - not being restricted to a certain / time is great.

Tell us about your most memorable match(es)
1) vs Jason Kraman - lost the first set 6-1 but came back to win the last 2 sets.
2) vs Fred M - my first loss, was memorable not only because the match was.
close (lost in a 3rd set tiebreaker), but also Fred and I have similar playing styles.

Who are your favorite rivals in the league? Why?
Don't have many big rivals yet but so far:

1) Jason K - Got to play 3 matches this session (he won 2) - we seem to bring out the best in each other.
2) Dedan T - We played 2 matches within a week, I was glad to win both but he's a great competitor and fun to play with.

Do you have any other interesting comments about your experiences with the league?
Playing both singles and doubles this session.  Perhaps not sustainable as it's taking up a lot of time but it's enjoyable to do both. My partner is colleague (and 3.25 division player Sushil Sharma), and so far so good (4-2 record this far, this session)

How did you get started playing tennis?
My father played semi-regularly.  He got me a racket and got me into it when I was 11 years old.
What level player are you? (NTRP rating)
4.0 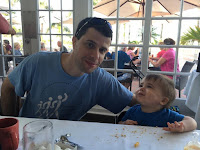 What do you love about tennis?
I love the competitive nature of the game.  Uses a combination of hand-eye coordination, quickness, and other physical traits.  But really it's a big mental challenge, which is fulfilling to try and bring out the best in myself while having fun, against players of a similar skill level. Lastly it's a good workout.  I'm honestly not a big fan of going to the gym, running on the treadmill, etc.  Tennis is fun and good health-wise.

Who are your favorite pro players? Why?
Favorite of all time is Sampras.  Partly since he was in his prime from when I first played tennis to when I was in college.  But also his simple yet very effective style and humility. Out of current players, I hate to give the obvious-choice answer but Federer has just been such a pleasure to watch.  Not the hardest hitter, fastest or strongest, but just has so often found a way to win.
Tell us a little bit about yourself, for example: What do you do? Where did you grow up? What are your hobbies (besides tennis)? (Feel free to share any interesting details about your life.)

I grew up in the Philadelphia area (Abington Twp).  Went to Penn State for undergrad, and UC Santa Barbara for grad school in geography/Geographic Information Systems.  All 6 years combined I played in the intramural tennis tournament, winning the tournament once at Penn State in 4 tries (great accomplishment I think given ~40k students) and twice at UC Santa Barbara in 4 tries (2 per year).

I have been a consultant in GIS and statistics for most of my career. Starting early 2016 I am a Sr. Geospatial Analyst for Insurance company Chubb. I married my wife, Jodi in 2013 and we have 1 son, Bryce who is almost 2 years old.  Already got him a mini-sized racket!