Ganesh Venkat : For the Love of the game 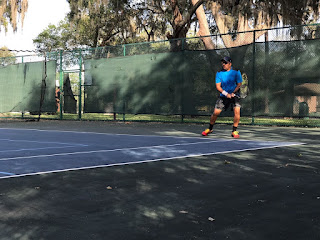 Hi I'm Ganesh Venkat. I'm a 39 year old IT Architect from Orlando. Since moving to Orlando in 2015, I was looking for a competitive league and was glad to find Tennis League Network and the Tennis-Orlando.com chapter and have been a regular in the league winning my first championship in the summer of 2017 and striving to go from a "Competitive 3.5" to "Advanced 4.0" and right now I’m somewhere in between :) From earlier this year, I have become a little over obsessed with Tennis and enjoy hitting with a few regulars here and I can say my game has got better and I’m always looking at opportunities to improve my game.


Which league are you a member of?
Tennis Orlando, MEN'S COMPETITIVE1 3.5

How long have you participated in your league?
Started in Spring 2015.

How did you first learn about it?
Through a guy called Chad Smith who I used to hit regularly when i moved here and then a group of friends who actually enrolled in the league and are still playing.

What do you like most about the league?
The flexibility and the flavor of opponents that the league provides. There is no schedule enforcement unlike many other leagues that I have played. You can never relax that you have beaten a guy, The next match can bring you down. 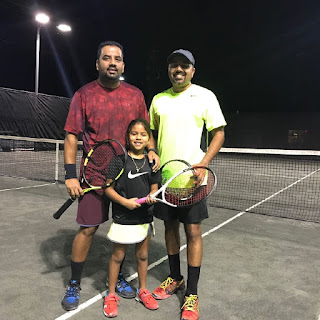 Tell us about your most memorable match(es)
There are a lot. Specifically I have to pick two matches.  Beating Naveen Marimuthu in a 2 set and a 3rd set Tie break. 7-6, 2-6 and 10-8. He was in peak form during that time and I was barely holding my own that season, After holding on to a tough first set which I won 12-10 through a tie break, He came back and obliterated me in the second set. I went for the shots in the third set tie break and managed to win. But the match was memorable because I was playing my shots where I intended them to go and it was a sweet win

The second match was beating Ken Wilkins in a three setter after going down in the first. 2-6; 6-3; 6-3. Ken is one of the toughest competitors in the league and I had beaten him a few times in another league before he had transformed himself in to an effective counter-puncher. This match gave me so much satisfaction that I was able to beat him in his own game.

Who are your favorite rivals in the league? Why?
Hands down Gowtham Ponnusamy and Naveen Marimuthu. Both of them are friends of mine and Improved their game tremendously from where they started, we hit quiet often since we live close and we know our pattern plays very well, So it's always a good feeling to get the better of them, even if it means just for the bragging rights.

Do you have any other interesting comments about your experiences with the league?
Playing the league organizer Steve was fun.  It was so nice of him to take time off from his schedule and play with the local players. The other thing is, The variety of players you meet from all walks of life. I'm looking forward to the year end Miami tournament.. 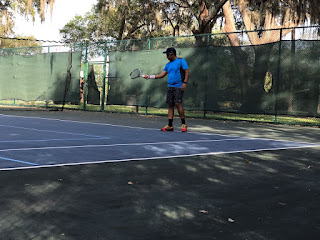 How did you get started playing tennis?
I played some recreational tennis from 2001-2003 when I was in grade school at Edwardsville, IL. In all seriousness though my friend Karthik Kannan from St.Louis motivated me to pick up the racquet again and we started hitting again in the 2011-2012 time frame and ever since I have not stopped. Even now we take occasional tennis vacations to meet up and hit in Florida or Illinois. In fact, he has a vacation planned in December to travel down here and we hope to play a few times.

What level player are you? (NTRP rating)
Advanced 3.75

What do you love about tennis?
I think it’s a sport that I can still play when I grow old. That’s something I really love about Tennis.

Who are your favorite pro players? Why?
Andre Agassi and Rafael Nadal. Just for their flamboyant style.

Posted by Shiful Alam at 9:56 AM No comments:

The TennisDC Player of the Year (POTY) race came down to the wire.  Adam Cooper came from WAY behind to take the victory.  Friendly rivalry helps us all get better.  Blog entry as written by Sat Jiwan Ikle-Khalsa.

These are just the highlights of Adam Cooper's 2017 season, among some other impressive accomplishments.  He's always been a dedicated competitor, but he pulled out all the stops utilizing his A game to the best of his ability and adding a B game, when he knew he needed to add something different.... something a little extra. 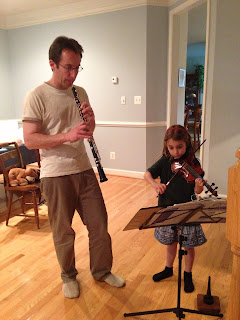 I've known Adam for two and a half years. We've played 6 times in the Advanced and Elite Divisions of Tennis DC, primarily in Montgomery County, MD.  And while I've won each match, we always have a good time, we talk about our daughters' schools, and we had our best set yet in our last meeting. Having 12 deuce points over two critical games. Adam usually plays higher risk than I do, and he played the strategically smartest I've seen him play yet.  Even letting out a couple uncharacteristic frustration screams.  Over the years we have both been improving our games, continuing to push each other and our opponents to achieve more.  Apparently I pushed him too hard.... in a good way!

Over the last several years Adam completed an ever increasing number of matches (31, 66, 96, 109*) , all while maintaining a winning record in every category (matches, full three setters, 2 setters with tie-breaks, and 10 game pro sets), with the only exception being a nearly 50% record in playoffs 25-27.

And just last year in 2016, Adam won Player of the Year through a brute force effort, completing 96 matches and 63 wins, but did have to take some time off due to an injury late in the season.  For 2017, Adam was on an unwavering mission.  He set many goals and reached them through dedicated effort, intense scheduling, and being creative and adapting to his opponent.

Story of 2017
After a slow start, he had been on track for 100 matches since mid-year, averaging 10-15 matches per month, with multiple 20+ match seasons.  His player of the year rival, Sat Jiwan "SJ" Ikle-Khalsa (who won POTY in 2015) started the year strong with a few referrals, which are like gold in the player of the year points.  Adding several more by mid-year via posting flyers across the region anytime he played a match in a different area, and general networking.  By end of the summer, with SJ's 8 referrals, it didn't seem like Adam could ever catch up with SJ.... even by playing multiple days with two matches and even maintaining a 2:1 win loss rate, and having some good playoff/tournament runs.

And those 8 referrals are so tough.  Though SJ had been playing less frequently, SJ was winning enough to keep a sizable lead.

Through the fall, Adam kept playing like a madman on a mission.  BUT he also added to his game plan - he started posting flyers, did a Yelp review and a TLN blog post.  Anything he could to close the insurmountable gap behind SJ. Through colder November and December, braving 32 degree blustery mornings for OUTDOOR matches, Adam kept it up and it paid off.

By early December he passed SJ in POTY points, earning a lead of 70 points, knowing that SJ was just one referral away from closing that gap again.  Then, in mid-December while setting personal playing and winning records, Adam got another of those hard-to-come-by referrals (his 3rd for the year, notching yet another personal record), setting him clearly out front in the Player of the Year race, with only 10 cold, holiday days remaining.   And nearly achieving an amazing 1,000 player of the year points. (975 - rivaling those LA players with 700 matches and 30+ per season standards).

Congratulations to Adam on a smart match.  Well Played! 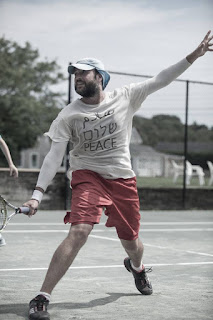 Article by Sat Jiwan "SJ" Ikle-Khalsa, 5.0+ Elite+ Player in TennisDC, member since 2013
**Player of the Year 2015 - when HE came from behind to win in the last weeks of the year, during the slow winter season**

SJ is a TennisDC legend. When I started becoming active in the league he was already the leader in number of wins and had a pocketful of tournament titles to his name. He is a player who lives and breathes the game and is well-known for the almost scientific approach he brings to matches. He is also generous with his advice and astute observations post-match and I’ve seen his warm, light touch when coaching children.  I’ve never come close to him in either results or ability, but I always enjoy our matchups.  While I’ve been playing longer than he has, I tend to have a looser, more instinctive (read: mindless) approach to the game. Our POTY back-and-forth this year has been a lot of fun, and is coming down to wire to see who will be the first repeat winner for TennisDC!
--- Adam Cooper

Posted by Shiful Alam at 7:56 AM No comments: