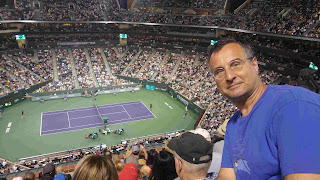 We caught  up with Goran Alimpic from TennisPortland.com the Metro Portland Oregon Tennis League.  He's going to win the 2018 Player of the Year contest.

Tell us a little bit about yourself, for example: What do you do? Where did you grow up? What are your hobbies (besides tennis)?
I work from home as a software engineer. As I moved to USA in 2016 (I used to live here a long time ago, as well), I am not really connected to a particular place, so I move around a lot - it is just more interesting that way. As for other hobbies, I like to travel, I used to produce music and play in a band, I tried SCUBA diving and flying, but the only thing that stuck was tennis.

Which league are you a member of?
Portland Tennis League,  he has a 48-20 record and has only been playing since Nov. 2017.  He's played matches in 3 different franchises: Tennis-Austin.com, TennisDenver.com and TennisPortland.com

How long have you participated in your league?
6 months in this one - before that I played in leagues where I lived (Austin, and Denver). In total, that's a year and a half.

How did you first learn about it?
I am not sure - I either searched the net for some local leagues, or heard about it from somebody.

How often do you play?
I try to play as often as I can, usually several times a week. 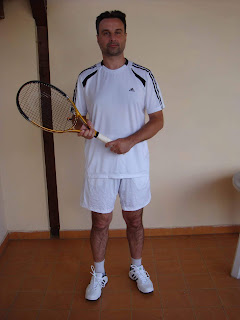 What do you like most about the league?
I like how everything is well organized and without a glitch. It always goes forward and it is easy to find an opponent.

Tell us about your most memorable match(es)
I remember losses better: in the most recent league playoff match I was leading 8:5 in the final tie break and serving. My nerves got the better of me and I lost 5 points in a row, and the match.

Who are your favorite rivals in the league? Why?
Whoever is super friendly and likes to engage in conversation during breaks and after the match. From the competitive perspective, I like players who attack more and punish my short balls, rather than just return them, since then I feel I can also adjust my style and be more aggressive, which makes the match more intense.

Do you have any other interesting comments about your experiences with the league?
I am actually amazed with the level of honesty and fairness during matches - I rarely ever had an issue regarding the score, validity of the point, someone's behavior or anything else. Every match is always a pleasurable experience. 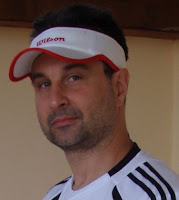 How did you get started playing tennis?
I wanted to exercise more, and It seemed like a better alternative to working out or running, since I find most physical activities boring, and playing a competitive match is more interesting.

What do you love about tennis?
I love the competitive aspect of it, which shows on all levels: POINT - each one is its own little battle with beginning, middle, and end stages; GAME - even being independent, points in a game connect together as you play for the final game score and adjust your tactics to that end; MATCH - as you learn about your opponent's strengths and weaknesses, and your own form during the match, you change your style and strategy. Besides just hitting the ball,  it is everything that happens in your head while trying to outsmart and outplay the opponent.

Who are your favorite pro players? Why?
Since I am originally from Serbia, I can't help but always root for Djokovic. As for the style of play, I like Nadal - we are both left-handed, prefer clay courts and use the same racquet. (That's where the similarities end, though)