Player Profile: David Sherby - To be inspired - that's the secret 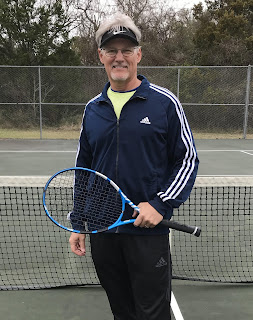 We connected with David Sherby from Tennis-Austin.com.   I’m in creative services, which straddles the line between marketing, creative, and operations. It’s a role where I get to use both sides of my brain, usually on a minute-by-minute basis. Which in part explains why I like tennis: there are always fundamental mechanics to follow, but you also have to “see” where the next shot is coming, or going. I enjoy golf, racquetball, staying fit in general, cooking / grilling, music and travel. I moved to Austin in the early 80’s - it sure has changed quite a bit, but still one of the best places to live.

1. Which league are you a member of?
I was ready to get back into a league, but not the old one. It was too limiting on play (once a week, no playing a double or third match against another player). I had desire to play more and found Tennis-Austin, researched some of the players and saw 2 of the guys from spring playing in this league. A quick chat with one of them and I joined the Fall2018 league, 3.0-3.5.

2. How often do you play?
I like to play 2-3 times a week now. It’s been great mental & physical exercise, and helped with my overall ability to focus on a task. With the number of equally skilled players in my division and the league software interface, it’s not hard to schedule a match. I think that’s one of the biggest benefits of Tennis-Austin.

3. What do you like most about the league?
Upfront, what I liked about Tennis-Austin was the super flexibility to play as much as I wanted, that there were a dozen+ potential opponents to schedule with, that there was a divisional playoff, and a national championship (one can dream, yes?). What I’ve found is a lot of players like me trying to get better, everyone is super supportive of each other, I’ve made some good tennis friends and budding rivalries, lots of player & match stats to pour over, and an engaged admin team that keeps the playing skills fairly equal among the division players: no ringers stealing the fun out of a lower division ranking.

4. Tell us about your most memorable match(es)
The really tight matches are the most memorable, and win or lose I always come away with a new piece of knowledge about myself / skills, or how to play better against my opponent next time. I’ve only played 25 matches, but the ones against RayG, LarryP, TomL, BrianD and YolandaR have made my mental “best of” list. Each time we play it’s a fair challenge, super enjoyable, each player hits great shots, the momentum swings back and forth, and we seem to have a good time playing. As Ray says before each match, “Let’s have FUN!”  I think that’s as key to the spirit at this level as much as anything. No one’s handing out million dollar checks to the winners, that I know of! Some days you have it, some nights you don’t. Keep playing.

5. Do you have any other interesting comments about your experiences with the league?
Overall, the quality of people I’ve met. Win or lose, there’s always a good spirit to the match and relationship. I feel like I’ve broadened my circle of friends. I KNOW I’ve improved my play.   AND, I no longer worry about how I’m going to play in that occasional doubles match with my friends. Sure, it’s a different game than singles, but when I started acing my serves and hearing, “Dayumm - where’d THAT come from dude?!” : the knowledge that I was no longer the worst on the court was AWESOME.   (Sometimes it’s the little things in life.)

6. How did you get started playing tennis? 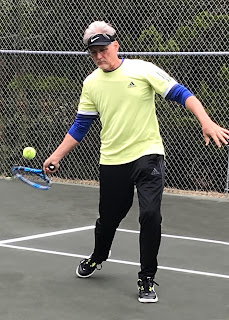 In the fall of 2017, I was invited by a good friend to sub for a weekly doubles match, as one guy was out rehabbing his knee. I had played as a kid without any formal training, but had stopped playing for, oh, a few decades. Needless to say my initial time back on the court led to a lot of frustration. I’ve always been athletic but my mechanics were a complete mess. My friend (and new friends) must have been desperate! But I was hooked.

Then the 4th came back from rehab and I was relegated to playing once a month. Bummer! I knew if I was to get any better I needed to play a lot more. So after joining a different league in the spring’18, and going 0-6 (yeah, it was that bad), I took the summer off. Took lessons. Bought a modern racquet. (WOW!) Toyed with adding lead tape variances for better weight & feel. Watched YouTube vids of the greats. Hit thousands of balls and serves on our neighborhood court. Met a neighbor and practiced once a week with them. I got better; not 4.0+ better but my confidence was there.

8. What do you love about tennis?
.....It's a pure natural rush. Plus, playing better tennis has inspired me to take better care of myself. Diet, exercise, positive outlook, new friends and challenges... all of these are part of living a better life. Tennis is a sport where, if you’ve some natural talent and/or a desire to practice, learn and become better, you can hit shots as seen by the greats on TV!  It’s both mental and physical. One-on-one competition is pretty bare bones, and coming away with a W is a great feeling. Practicing and then hitting that screaming forehand bullet down the line to the corner in a match when you really need it - unequalled. Stuffing an ace or three, and then getting applause from your opponent - priceless.  I can’t hope to hit a 30ft jumper over a 6’0” or taller dude, but I can hit these shots on a tennis court. It’s a pure natural rush.

9. Who are your favorite pro players? Why?
No offense to Roger, Serena and Rafael, but I gravitate toward underdogs and up and comers. Juan  Martin del Potro, because of his massive serve. Sloane Stephens, because of her tenaciousness.  Alexander Zverev - just seems to have the “IT” factor and great future.