Ray Gonzales - He's an integral part of our Tennis-Austin community. 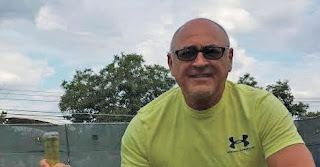 We caught up with Ray Gonzales out the Tennis-Austin.com league.  He's played an amazing 333 matches over his 8 year career.  Last year Ray was Player of the Year runner-up and this year he's leading the race by only 10 points as of this writing.

Tell us a little bit about yourself.  What do you do?  Where did you grow up? What are your other hobbies?
Well, I retired from Time Warner Cable (now Spectrum) about 8 years ago.  I’ve always been somewhat into staying fit so I hit the gym at least 3x week and work with light weights.  I used to run and even ran an Austin marathon back in 2009.  Nowadays I get my cardio from tennis and speed walking my crazy dog, Archie.  Other hobbies include reading thriller novels, gardening/landscaping, and travel when I can afford it.  I grew up in west Texas.  Attended high school in a really small town, Mertzon, near San Angelo.  Would not trade growing up out there for anything.  Moved to Austin in 1972 and been here ever since!  Love it here.

How long have you participated in your league?
Since August of 2011….8 years!

How did you first learn about it?
I was playing a match in a different league, and my opponent referred me to Tennis-Austin and I’m so glad that he did. 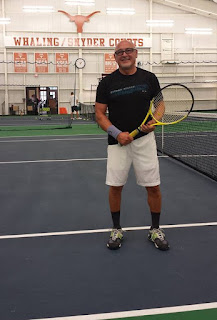 There’s no ONE thing I like about this league; there are MANY reasons why I will sign-up, season after season.  Just a few reasons:  easy to set up matches; the schedule reminder is wonderful, the coordinator is fair with level placement, easy to submit scores, fantastic discount based on number of matches played, fair and fun season playoffs, separate tournaments if you care to join, full list of tennis courts, fair rules and guidelines for players.  Just an overall statement; this league makes it EASY AND FUN!

Tell us about your most memorable match(es) and who are your favorite rivals in the league.
As we all know, you never know who is going to have a really great game and play really well on any given day.  That’s what makes tennis such a great sport.  But, we all have those certain opponents that we love to play because they consistently give you a FUN and COMPETITIVE match.  Sometimes I win, sometimes they win.  Recently, it seems that my matches have been very close, going 3 sets and 2 hours.  Not long ago, Tom Linehan and I played a 3rd set tie-break that went 16-14…crazy.  Other great rivals and fun matches have been played with David Sherby and  Brian Determan.  This current season has brought new players who I’ve really enjoyed playing:  Noah , Katar, Son, Ilya to name a few.

Do you have any other interesting comments about your experiences with the league?
I would just like to say that this league has really given me a sense of camaraderie and well-being.  All of the players I’ve met (both young and old) have been super kind.  Playing in the league has definitely helped to keep me a good physical condition.

How did you get started playing tennis?
Don’t laugh, but I picked up my first wooden racket back in 1968 when I was a senior in high school.  Played for a year and then dropped off for several years, then played occasionally for several more years.  Once I retired in 2011, I started playing regularly; and let me tell you, it was a rough and ugly start. 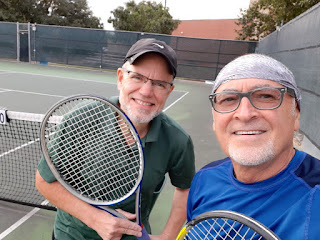 Do you play to compete or for fun?
BOTH!  Before every match that I play with someone, I will always say “let’s have fun”.  And it’s not so important if I win or lose; but, I always strive to hit winners and/or make decent shots.  And when I do hit a great shot, there’s not a better feeling!  And other players will tell you, that I will commend them on their play.  I’m wow’d and enjoy seeing great form and placement.

What level player are you?
I started out as a 3.0 player and was soon promoted to 3.5 level where I stayed for a few years. But recently my win/loss count hasn’t been so great.  I’m currently at a 3.25 level. I’m comfortable at this level and I still have the opportunity to play others at higher levels, which I do.

What do you love about tennis?
Tennis is a sport that exercises not only me physically, but also mentally.  As you get older in life, your body has a natural tendency to get slower; what a great feeling it is when I run down and return a difficult shot from my opponent.  Every time I play a match, I try to work on improving some part of my game; my serve, net play, backhand, forehand….something always needs improvement. And meeting so many different opponent personalities; all of them have been great sportsmen.  Tennis keeps me feeling young at heart.

Who are your favorite pro players and why?
Novak, Roger, Dominic Thiem, Tsitsipas, Serena, Gauf, Venus.  I’m an avid Tennis Channel fan.  And love to watch these guys play.  Each of them are all business when they play and give it their all.  Cool, calm, collected. Incredible players.

Couldn't agree with Ray more! He's an awesome ambassador for this league and tennis in general. Plays anyone, anywhere, anytime, is always a good challenge and sport, win or lose. You haven't played the Austin league until you've played RayG!
DASherby