Pacing Yourself - By Adam Cooper 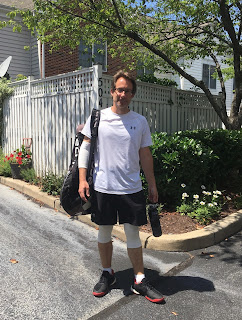 We are all incredibly fortunate that tennis is one of the few sports that can be played in reasonable safety during this surreal limbo. Ever since the courts in the DC/metro area reopened, there have if anything been more players than usual out, perhaps as newcomers embrace the sport as their traditional exercise outlets (indoor gyms, team sports) are still not available.

As I returned to playing after hunkering at home for over two months, it was difficult to resist the temptation to immediately schedule as many matches as possible and basically go from 0 to 60 in my eagerness to be doing something other than sedentary Zoom calls and watching Netflix (original series Star Trek, anyone??) But after having spent much of the past couple years managing injuries and playing in starts and stops, I knew it would be wiser to come back gradually and deliberately.

For anyone else trying to return after a layoff, or just trying to stay active in middle age and beyond, I thought I’d share a few tips. They are all fairly self-evident, but still practical, and they all come down to pacing yourself. 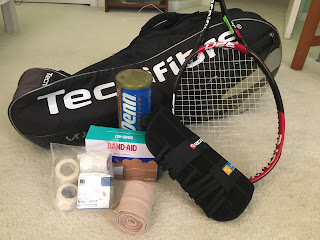 Space your matches out. Whether you play three times a week or three times a month, make sure you take enough time between matches for your body to recover. As you grow more accustomed to playing this time can be made shorter. For me, I always try to have at least a day of rest in between matches.

Keep a consistent schedule. Once you have a routine,don’t change it up without a good reason. If you tend to play in the evening rather than the morning you should think twice before altering the pattern.  I know it takes me while to loosen up over the course of the day, and I try to protect myself by not playing too early.Also, try to aim for roughly the same number of matches from week to week or month to month. Playing too much before your body is ready is just asking for injury.

Warm up before you play. I try to go for a gentle half mile run, including side steps and jumping jacks, followed by a short walk of about as long before I even show up to play a match. Once my body is warm, I also take time to stretch. Stretching when you’re totally cold is no longer recommended. 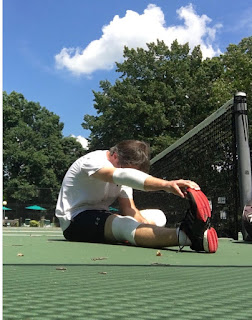 Play smart. It’s hard in the heat of competition not to want to give 100% on every point. In general, you should, especially if you’re young. But I know if I go full out chasing down a lob or drop shot that even if I win that point I may end up losing the next two or three because I’m out of breath. So, if it’s2-2 in the first set and I’m up 40-love, I might let that lob go. Keep an awareness of the big points and make sure you’re 100% committed physically for them, but if you’re coming back, prone to injury, or just older, you may want to be choosy about expanding your maximum effort.

Playing tennis, especially on what is essentially concrete, is tough. We ask a lot from our bodies to make it happen. Don’t do too much too soon or you may have to ask your body for forgiveness.