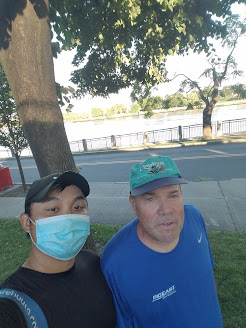 We caught up with Artie Wood yet again out of the TennisNewYork.com franchise.  It's refreshing to have Art back to playing at levels he use to play at several years ago.
What league are you a member of?

Hi my name is Arthur Wood.

I play in B-Q B division.

How long have you participated in the league?

I have been a player in Tennis NY since 2012

How did you learn about the league?

I first learned about Tennis NY from the internet.

This season I have been playing 4 times a week and 1-2 doubles matches.

What do you like most about the league?  Do you have any interesting comments about your experience in the league?

I like that you can play as much as you want. I used to play a lot and then the last few years, not as much.   Now I've played 36 singles matches and 5 doubles matches. Tennis NY is perfect for me because it keeps me busy.  I especially have enjoyed referring people to the league and helping them get acquainted with the league. I met Brian Jones at Lincoln Terrace. I gave him a card.   About a week later I invited him out to play.  2 other players Virginia Ofer and V. He is very much enjoying the league and I've heard him refer people to the league as well.  I also have been honored to be player of the year a few times.   It means that I'm passionate about Tennis and I have perseverance. It feels nice when players first meet me, they say wow you've played so many matches.  I've played 880 matches to date. I recently won my 300th match. 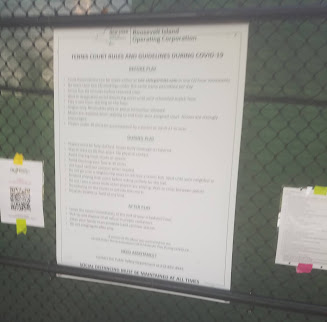 Tell us about your most memorable matches.  Who are your favorite rivals?

I've had many memorable matches.   This year I've had fun playing new people.  The interesting thing I usually do well the first match, but the second match players sometimes figure out what you're trying to do.    I have a lot of slice, drop shot, lob and decent net game.  I've had really good matches with Virginia Ofer and Vinacek Behl. I would say my most memorable matches this year was when I played Jeff Rosenbloom.   The first time I played him he was rusty and I managed to hold him off 10-7.   I felt that it would be that way the next time. We played a few weeks later and he blew my doors off.   Another player I beat the first time, Kevin Doong   I pulled out a 10-8 win.   The next few matches he's blown me out.  I liked his game so much I chose Kevin to be my doubles partner.  Another player Cristian Jerez, I also beat the first time 10-9.   I haven't been able to beat him anymore.    I need to come up with some new tricks to even up the playing field.

How did you get started in playing tennis?

I played ping pong first.   Then around age 17 I started playing tennis.   I got my family into the sport.   Unfortunately I didn't get much instruction so I taught myself.   I am a very unorthodox player so I can confuse players for awhile.   I need to be able to adjust when they've caught up.

Do you like to compete or play for fun?

I do play to compete.   It feels good when you're in the right frame of mind.   If you aren't mindful while playing it's difficult to compete to your fullest.   Lately, I've been playing fun doubles and singles at night. When you don't take tennis so seriously it has its good points also. 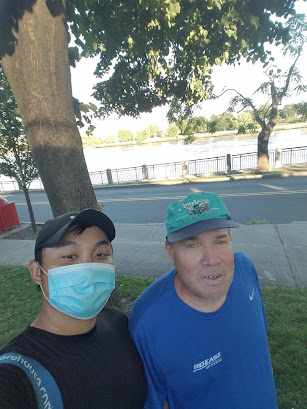 Who is your favorite pro tennis player?

My favorite player now is need to hit with more depth. Juan Del Potro. He's had major wrist injuries and he's managed to compete well. I can identify because I've had similar issues in the past.

Tell us a little bit about yourself

I used to be a teacher and site director.    Now there aren't as many outlets to keep me occupied and fulfilled. Tennis keeps me alive and doing things. I've met some friends from the league.