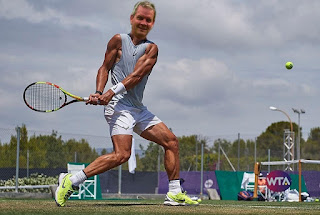 We caught up with Mark Copithorne out of our TennisEastBay.com franchise and here's his story:

I grew up in New Hampshire near public courts and played often with family and friends. In high school I joined the tennis team. On the practice court I was among the best players. But in a match, my right hand would lose its cunning. Under pressure, I went to my strength, my thinking mind.

I’ve played off and on since then. When I turned 50 a couple years ago I resolved to try to play tennis and compete more consistently. I am really pleased to have found Tennis League Network and the East Bay League. I’ve played in every season since I started and I feel satisfaction in reaching the milestone 100 matches. I would like to be playing twice a week but I succeed about once a week. It is a challenge to consistently throw out the lines to schedule matches throughout the season, so I appreciate invitations.  I have had many good rivalries with opponents I have learned a lot from.

All dimensions of my tennis play have improved somewhat. What has improved most is my ability to compete.  That means consistently trusting my body whether my thoughts or feelings are up or down. I do bring emotion to tennis, cheering my winners and my opponents’, squawking at my mistakes. Even though I still lose more than I win I know now I play my best tennis in competition. 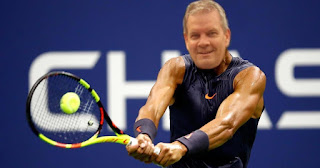 I think of myself as an unlikely person to be an athlete. So it makes me smile to think that, while I can’t say I am in the best shape of my life, I can say I am in the prime of my athletic career. I am grateful to Tennis League Network for adding that to my life at a level that really works for me.

I am married with a college age son and a daughter in middle school. My other avocation is Zen Buddhism and I’ve practiced in a community for decades. Letting go of thoughts and feelings while seated in zazen and while running on the tennis court mirror each other.