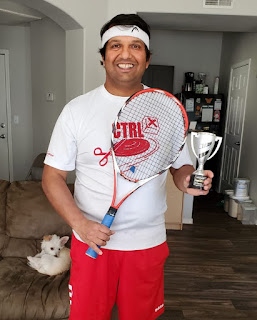 From Chicago to Phoenix, the first 100 matches have been quite a journey!  I found TLN when searching for tennis on the Meetup App in 2018.  I had been playing tennis socially for years, but had yet to try a league.  The first TLN match I played was against Steve Domer, at Hamlin Park in Chicago for the Spring 2018 season.  With only 2 courts in a busy neighborhood, time was a constraint and we chose the 10-game pro set match format.  But the match was not short, after many games with multiple deuce scores, we were tied at 9-9 and I was due to serve.  We checked the rules for the format and it noted a 7-point tiebreaker to decide matches tied at 9-9.   We played this tiebreaker out and I won the match 10-9.

Fast forward to my 100th TLN match, a playoff match in Phoenix.  Having the best record in Division B (3.25 division), I was the #1 seed in the playoff tournament and got to play at my home court, the lovely Val Vista Lakes Clubhouse in Gilbert.  Similar to my first TLN match in Chicago, the outcome was decided by a tiebreaker.  However this was after a full 3 sets in a 3-hour match!  Josh Wolfson won 6-2, 2-6, 7-6 in a great match.  I will long remember the one match point I had, when leading 5-4 in the 3rd set.  Between my 1st and 100th match, there were quite a few notable matches and achievements. 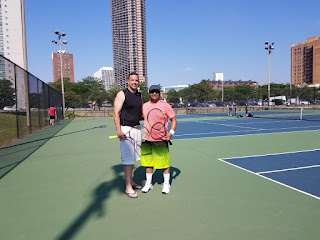 The first achievement was winning the Spring 2018 playoffs in the 3.25 division, going back to my first TLN season.  In the semifinal match, I played Shawn Blair, who would later be one of my top rivals.  Having lost the first league match to Shawn, I came out intense in this playoff match and took the first set 6-2.  2nd set went back and forth to a tiebreak, where I grinded out a win.  For the Finals of this playoff tournament, I had to play Jordi De Joseph, who had a great height advantage on me (see photo).  In the July humidity of Chicago, I had to extend points and not get intimidated by his powerful serves and overheads.  I took the match 7-6, 2-6, 6-3 and won the tournament!  It felt highly rewarding to win a trophy with a gift card and a free season.  I continued to play many TLN matches in 2018, particularly with rivals Shawn Blair and Louis De La Pena,  and referred a few friends into TLN leagues.  That enabled me to finish in 1st place for the 2018 Player of the Year in Chicago. After my wife and I relocated to Phoenix in 2019,  I returned to playing TLN leagues.  Having only lived in the Midwest prior to the relocation, the concept of playing outdoor tennis year round was new to me.  But I definitely took advantage, particularly with playing more tennis in winter months.  As my conditioning improved, I thought about scheduling doubleheaders.  Why not play 2 matches for 1 commute?  The first doubleheader was in December 2020, playing Bret Burchard and Ryan Berns at Desert Breeze Park in Chandler (see 2nd attached photo).  Bret and Ryan also played a match that day, with Ryan taking a break between matches.  The format may have worked in my favor, as I played Bret right after he finished a match and played Ryan after he came back from some rest.  Having won both matches that day, I felt confident to schedule more doubleheaders and achieved playing 20 matches for the season.  That led to earning a free season.  I also earned many Player of the Year Points from all these matches, along with referring a couple friends into TLN.  That enabled me to finish in 1st place for the 2020 Player on the Year in Phoenix. 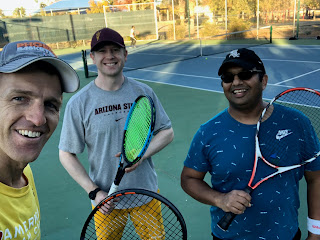 My fondness for playing tennis has led to an improvement in NTRP.  Currently I'm playing in Division A (3.75 division) in Phoenix for TLN in singles.  I also play in a 3.5 to 4.5 doubles league set up by my home court, the Val Vista Lakes Clubhouse.  Thanks to my wife, Vani, for being flexible with my tennis schedule and her support.