Player Profile: Matt Schneiderman - I am playing tennis because it's fun 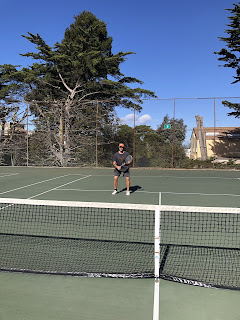 We checked in with Matt Schneiderman and here's his story.   Matt's Profile:  https://www.tennissf.com/85949/profile
Which league are you a member of?

A recent 3-set match that kept going and going... We had a 1-hour court reservation and thought we'd have to stop after the first set -- but no one showed after the first hour, so we played on. Split the first two sets (one in a tie-break) and expected to get kicked off the court -- but again, no one showed to take the court, so we played on. The third set went long, too, so we wound up playing a full three hours before we finished. Exhausting but so much fun.

Marty Pye. Super nice guy, good matches, and he plays net so effectively — and I suck against good net players. It's a good challenge to play against a style that I struggle with. He's also been OK about my minor temper tantrums.

I lost 40 matches before my first win. I hadn’t played much before moving to SF and joining the league — playing in NYC seemed too complicated. I didn’t really know how to play, but my opponents didn’t seem to mind crushing me. Still, I kept playing and took some lessons to improve, and after several seasons the matches became closer. I try to keep my beginner’s mind mentality even as I start winning more often, and remind myself that the fun is in learning. 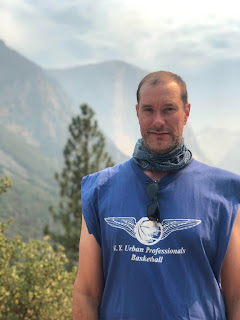 Played in middle school, and then not again until I moved to SF in 2016 when I joined the league.

I love learning — how to improve physically and mentally and how to deal with challenges. I've learned the most from the matches that were the most challenging — sets or even games I've lost that I felt that I shouldn't have, which frustrated me to the point where I threw my racquet down in disgust. Feeling frustration and recognizing it for what it is, then reminding myself I am playing tennis because it's fun.

I’m a 45-year-old single father to a 4-year-old. Besides tennis I enjoy puzzles, board games, and running — mostly after my kid.