Vijendra Singh - He loves playing players with so many different styles 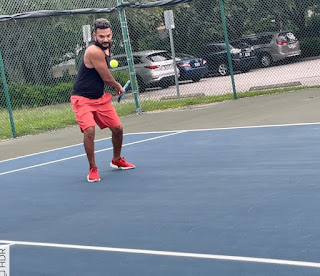 This is my second season. I joined TennisTampaBay in November, 2021 for the first time and this actually is my first league ever.

One of my friends, Raj Anne, introduced me to this league.

3-4 times a week. If time and body permits, my mind and heart asks for it everyday :-)

The best part is getting to play with a lot of different styles of players. Some love being aggressive, some would just love to keep building rallies. It really developed me better as a player. Before this, I have never played with these many different styles. And of course the flexibility to meet people and play. I never run out of people to hit with. It has given me many new friends and I would love this community to keep growing further.

I would think of 3 matches which really stood out and stay in my memory. One was last season's semi-final with Tom Foran where I won but I loved playing with Tom since we kind of have a similar style of playing, we both have decent top spins and good serves (Tom has better than me of course, balls were kicking 2-3 ft over my head almost every time).

Second was the one I played with Chritopher Conte (I'm sure he is 4.5 or up) and lost 0-6,0-6 ( In my opinion, he is the only opponent I faced ever where I could not handle the pace of the shots).

Last but not the least was with Alexander Damjanovic, lost 5-7,5-7. Both sets started with 0-2 and I took the lead to 3-2 on both and I was 2 points away to level the first set (at 5-6 down) and 2 points away to win the second (at 5-4) but couldn't convert it. Alexander really has great slices and flat top spin shots with wide angles. I was really happy with the way I competed in this match knowing Alex plays 4.0 and 4.5 level. 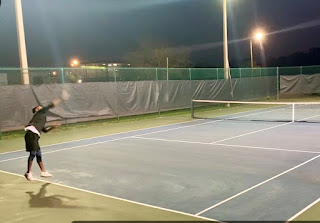 I would not say rival but I would love to play with Andrew Epperson again and again, even though he beat me badly in both the matches, I see him as the most consistent player with the best defense. I wish I could get only 50% of his consistency.

Well, when I started playing this league I used to get frustrated initially with few unconventional styles of tennis and would just give away the match in frustration. I slowly learnt to focus on my game rather than the feed and I can proudly say I'm getting better. With only 15 months of tennis in my life, without any professional coaching, I feel I came a long way and thanks to this network of players as well who really shares great feedback after every match.

I was out of work for a few months during 2020 and finally October, 2020 started with one of my friends just to kill some time but never knew that this would become my obsession (in a positive sense).

Right now, I am playing to improve and learn. Playing great and losing gives me more pleasure than playing bad and somehow winning. 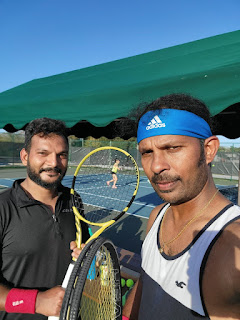 I just love every aspect of it. The mechanics behind how a contact should be made to mental toughness.

Rafa. He has got the best shots either forehand or backhand. I think the only player with no bend in his arms while contacting the ball gives him the most spin and power.

Mechanical Engineer in Application sales. I grew up in one of the Himalayan towns, in north India and came to the USA for a Master's degree and have been here since then. I love working out in the gym 5 days a week if time allows and love hanging out in the mountain sides. Just have one beloved wife :-) and one kid.

Posted by Shiful Alam at 8:21 AM No comments: 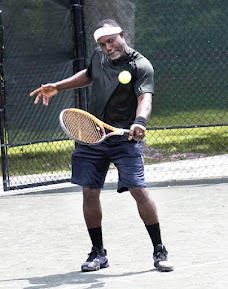 I've been a member of TennisFortLauderdale for almost 3 months now. I've played other leagues which I enjoyed very much but TennisFortLauderdale is the best so far in terms of self-scheduled matches, incredible tennis players with different style of plays, the professionalism that is shown with each individual meeting for their first match is off the charts. 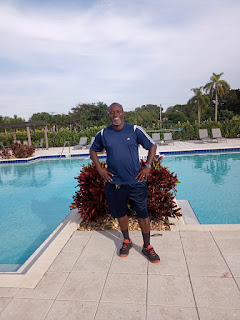 Back home in Haiti, I've always played soccer and ping pong growing up, I kept those 2 hobbies here in the United States convincing myself I'm never gonna let go untill 10 years ago, a co-worker, who herself did not know how to play tennis but was so concerned about me driving 45 mns back and forth for a soccer game, has invited me to play tennis and i must say "there's no other sport better than tennis. Since then, I took it upon myself to make it a challenge where the sky is the limit. I teach myself from day 1 and had the opportunity to play or practice at least 5 days a week by spending countless hours online watching videos, learning from anything that's helpful to help elevate and move my tennis game forward weather it's footwork videos, forehand/backhand/serve/ slice videos, you name it.

I'm always online learning, relearning something old or new. I discovered TennisFortLauderdale through a tennis friend who was playing a scheduled match, and as I watched the two of them going to each other's face with skills, consistency, great shot selection, anticipation and the ability to cover the court almost from all angles. I said I should try, so he sent me the link, I joined the same day and I played him in the finals during the playoffs to become a champion. I will never forget the last point of that match, the emotions, and the joy I experienced.

But it was not easy during the regular season and the playoffs. I met a bunch of great players who showed me what it takes to be part of the advanced level group, how much harder I have to work to get a point, a set, never mind a match.

Jessie, Tony, Luke, and Jeff just to name a few are some of my rivals, very challenging opponents whom I learned a lot from during warm ups and matches played. My game is very simple, nothing special in particular and that is why I admired those 3 players (Hsieh Sue-Wei, Iga Radwanska, and Ons Jobeur). No big power, no big groundstrokes but figured out a way to play smart and get the W. Lastly, the websites with players information and records are spot on and updated as we go. Hats off to TennisFortLauderdale crew.

Posted by Shiful Alam at 8:18 AM No comments: