Player Profile: Jeffrey Dimen - Appreciate all the ups and downs of tennis 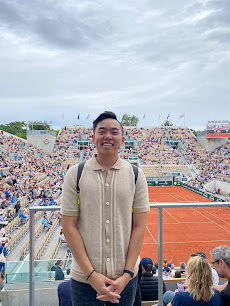 I have been a member of the Columbus league for the past 5 seasons. Before this, I also participated in the partner program of the Tennis Cincinnati league.

I first heard about it from one of my friends and hitting partners who I met in Cincinnati. He told me about the league, and after playing a few matches, I was hooked. I was happy to hear that they are active in a lot of other cities across the country, including Columbus.

I try to play at least 2-3 times a week. If i didn’t work 3 twelve hour shifts a week, I would be hitting a lot more!

I love how it has connected me to so many different types of people from various backgrounds and walks of life, that have all signed up in this league for the sole purpose of meeting up to play a game of tennis. I couldn’t have imagined when I was younger, playing this much tennis with a bunch of strangers I met online. It gives me something to look forward to on my days off from work, and it has served as a great way of staying active and meeting new people after moving to a new city. 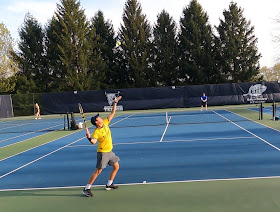 Towards the end of the fall 2021 season, I was on the outside of the playoff picture for the advanced division, and I was on a bit of a losing streak against some of the tougher opponents in the division. I was not playing the greatest tennis.  It was only a few days before the regular season deadline, my playoff chances slim, and I had to win 1 of my next  2 matches to get in. They were both against opponents with stronger records than me, but I came in feeling loose and relaxed and played my game and was able to sneak into the advanced playoffs for the fall by winning both matches in straight sets.

There are so many great players in my division, top to bottom, and I really believe that anyone can lose on any given day.  Craig, Adam, Adolfo, and Hakan are a few players in my division who I’ve played recently who I feel always give me a good match whenever we play. Craig in particular has only been playing tennis for a year or so, but already hits pretty well, so I think he’ll be scary if he keeps playing.  Also, Enver and Gautam are two guys in the upper division that I’ve crossed paths with that usually get the better of me, but regardless,  I always look forward to playing them because I know I have to be on my game to be able to beat them and I always expect a great battle.

My advice for new players would be to appreciate all the ups and downs of tennis because a lot of the mental strength you gain from playing this wonderful sport can also apply to everyday life as well. When I first started competing, I did nothing but lose. Even now, I still lose a lot, but I feel I’ve come a long way.  But tennis is like that sometimes. You’ll be playing great one week and then inexplicably, you might feel like you can't hit the broad side of a barn. But the important thing is to stick with it. You cannot afford to dwell on past mistakes. One thing I love about the league is how you can always schedule another match. No matter how many matches I lose in a row, my mentality never wavers and I approach each match with the intent to improve and a mindset that I'm going to do whatever it takes to win. In my mind, results are just a product of the process, so it is essential not to be discouraged by bad results, but instead focus on the process of improvement.

I have early memories of playing tennis with my dad when I was 6 or 7 years old, but I really didn’t start playing consistently until my sophomore year in high school where I mainly played doubles.

I have the most fun competing, so a bit of both I guess. At the end of the day, this whole league means very little to anyone else outside the league, but you definitely get out what you put in. I feel this league has helped me improve my game tremendously playing so many players with different styles.

I don’t have an official NTRP rating but I’ve competed in both 3.5/3.75 leagues so somewhere around there. My next goal is to compete at the 4.0-4.5 level. 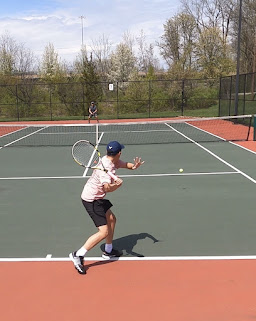 I love tennis because it provides an outlet from the everyday monotony of life. I also believe that tennis is a sport that challenges you both physically and mentally and helps you become better equipped to deal with adversity.  Just the past few months, I’ve really come to appreciate the constantly changing nature that a competitive tennis match can provide. I’ve tried to shift to a mindset where I look forward to the matches where my opponent is very difficult and nothing is coming easy.  I enjoy the constant problem solving that is involved in tennis and  trying to utilize one’s own strengths and weaknesses,  and figuring out what makes your opponent uncomfortable.  I love the ebbs and flows of gaining the lead, losing the lead, and (hopefully) regaining it back again. I really think that approaching the game in this manner has helped me build resiliency towards life's everyday challenges. Lastly, I also believe that this sport in particular is one that you can play well into adulthood and have longevity if you take care of your body right.

I will always respect the consistency of the Big 3, but I really am a fan of this next generation of tennis players coming in. Young players like Jannik Sinner, Carlos Alcaraz, Hubert Hurkacz, and Frances Tiafoe to name a few. On the womens side, I really like the game of Iga Swiatek and Leylah Fernandez. I feel like this next crop of young stars will hopefully keep the game exciting and attract new fans. 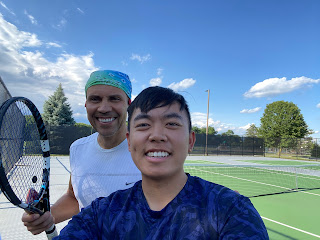 I work as a registered nurse at an ICU in a nearby hospital. When I’m not playing or watching tennis, I enjoy cycling, reading, playing musical instruments like the ukulele and piano, and spending time with my tabby cat. I also like to hang out with my close friends either by going out to new places to eat, or staying in for a game night.

Posted by Shiful Alam at 3:19 AM No comments: