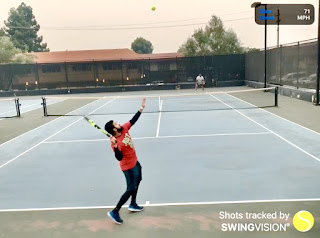 We caught up with Hassaan Khawar out of our San Jose community.   He's built an amazing 104-3 record. So needless to say he's an excellent player.  Here's his story.
Which league are you a member of?

I learnt about it from a friend who joined the league a few months before I did.

I try to play 3-4 times a week to keep myself physically active.

The thing I like most is the opportunity to meet new people and make friends who share a common passion for tennis. I also really like the fact that the matches are scheduled based on the players’ availabilities and location preferences which makes it easy to plan ahead and try to play as many matches as desired. 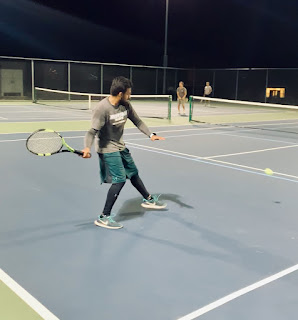 My most memorable match has to be my first Finals during the 2022 Winter Season, where I played Arjun Puranik. My previous match against Arjun was an intense 3-setter in which I managed to pull away with a 6-0 win in the third set. Going into my first Finals, I was feeling a lot of nerves and knowing that I’m playing someone as talented and competitive as Arjun, it only added to that. I went on to win the match 6-1, 6-3 which surprised me as I came into the match worried that the pressure might get the best of me. Winning that match gave me a lot of confidence going forward in my tennis career because I proved to myself that I can compete and play well even in high-pressure situations.

My favorite rivals in the league are Zeshan Anwar and Ekow Taylor. I initially picked up tennis in mid-2020 and the person I played with the most at the time was Zeshan. Zeshan is a friend that I’ve known for almost 20 years so all the matches I play against him in the league are special and give me a chance to earn some bragging rights. Ekow has been one of my greatest rivals ever since I played him first in April of 2021. In total, we’ve played 5 matches, 2 of which were in the Finals and two of which were 3-setters that went down to the wire. Whenever I play Ekow, I know I need to put my best foot forward otherwise his raw shot-making ability will leave me with no chance. 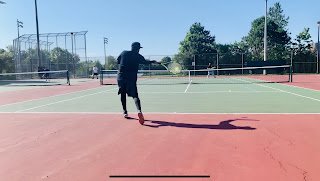 As mentioned before, I started playing tennis seriously about two years ago and have been part of the league for less than a year and a half. Form the time I played my first match in the league on June 19, 2021 to today, I’ve managed to play over 100 matches and I must have played at least 50 different opponents. I’ve made some friends along the way that now I keep in touch with even outside of the league and I hope to continue to stay a part of the league and compete for as long as I can.

I started playing tennis after the COVID pandemic had began as many of the other sports that I enjoyed playing (i.e. basketball, soccer, cricket, etc.) were difficult to play due to the lack of social distancing in those sports. Luckily, at the time I had courts within my apartment community so it was very convenient for me to call my friend Zeshan over and play with him. A few weeks after starting to play, I had become addicted to the sport and began playing almost on a daily basis for an hour or two.

I definitely play to compete but that doesn’t mean I forget to have fun along the way.

I’m not officially ranked in the NTRP rankings but I’d like to put myself in the 4.0 to 4.5 range.

I love the competition about tennis. Most of the sports I played growing up were team sports and as much as I love competing in a team environment, tennis gave me a different platform where everything was dependant on how I performed on a given day. I also feel that tennis is an amazing workout without some of the high-impact or contact of sports like basketball or soccer, which can sometimes begin to take a toll on the body if played over a long period.

My favourite pro player is Rafael Nadal. I love his fighting spirit and his focus during a match. He plays every point like his last and those are some of the characteristics that I admire in an athlete. Naturally, I am also very competitive and when I play, I play to win. But, losing is a part of every sport and every athlete needs to lose just as graciously as he/she loses which I think Nadal displays very well. 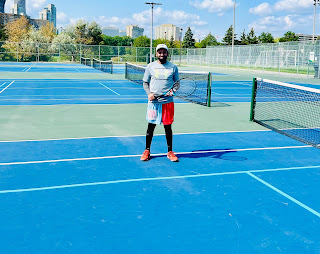 I was born in Pakistan and I moved to Canada at the age of 5. I completed my entire education in Canada and after obtaining my undergraduate degree in Mechatronics Engineering from the University of Waterloo, I moved to the Bay Area as a result of landing a full-time job here. Growing up, I loved playing various sports but most of all I enjoyed playing cricket. I competed at a fairly high level in cricket winning various awards at the high-school, university and city levels. I also enjoyed playing basketball a lot and I’ve been following the NBA very closely for over 10 years now. In general, I enjoy traveling, spending quality time with family and friends, and playing just about any sport.
Posted by Shiful Alam at 8:38 AM