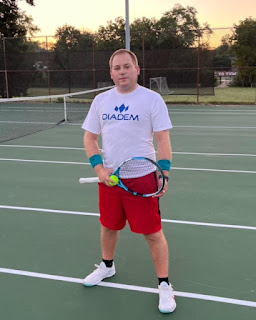 We caught up with Jesse Pfeffer from the TennisBaltimore.com franchise and check out what he had to say:
What do you love about tennis?  I love many things about tennis. First, the harder you work, the more you practice, the better you will become. There is no limit to how good you can become. Second, it is a very humbling game, there are three sets for a reason. You need to stay cool and collective and never let your ego get the best of you, doing so will make you lose. Don’t ever go into a match with the mentality that it is an easy win, it isn’t. Fourth, as much as it is great for your physical fitness, tennis is also a mental game and teaches you that if you put your head down you will lose but if you keep your head up and play your game you can fight through the toughest situations. Lastly, I have made numerous friends through tennis and hopefully lifelong friendships as tennis has no age limit.
Which league are you a member of?

This is my first year, second season. I played Spring Season 2 in the Skilled division.

A friend of mine who I hit suggested that I join.

Great players and great people. The ability to schedule your own matches is great too.  Have a made a lot of friends.

I developed a friendly rivalry with a certain player. I am 3-0 against him but every match has gone to a very close tiebreaker.

Chris Ozog, he has a very unorthodox game that can throw off even a seasoned player. He uses heavy spin on 50% of his shots. It has been a great experience so far. I like that I can play as much as I want. It has been great getting to know everyone.

I started playing tennis casually at a young age through high school. Played a bit in college. Did not start playing matches until last summer when a friend of mine suggested that I join the league.

Both, however, the competition is what drives me. I have played high level competitive sports for most of my youth. One thing about tennis is it takes a lot of work and a lot of practice to improve. That is why I try and play every day and watch film. The love for the game and the drive to improve my game fuels my competitiveness. At the same time, I play tennis because I enjoy it and because it is a fun sport.

3.5 NTRP (USTA rating from the leagues I have been in) 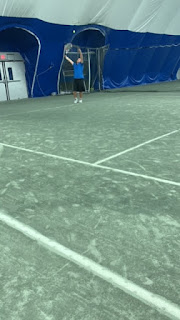 Active Player- Rafael Nadal. In my opinion he is the greatest player of all time from a pure game perspective and mentality perspective. He is an incredible athlete, and his strong mental toughness is what sets him apart as it did in the Australian Open this year. It would be so easy to throw in the towel, however he kept his head up, played his game and won three straight sets. Also, Nadal never gets angry and never smashes his racquet which are two things I admire and do as well. I think it is a complete disgrace to the game when a racquet gets smashed.