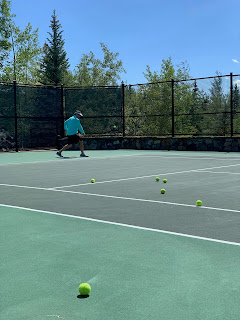 We caught up with Eric Dosal out of the Tennis-Miami.com community!  Here's his story.

I grew up in Miami, went to college at Babson College in Boston, then made my way to Wall Street to work in Finance for a few years before coming back home to Miami to join the family business.  It's been 20+ years since I came home and during that time I have been working with my family (mostly my brother) starting, selling & operating different businesses in the technology space.  Currently I spend my professional time running Compuquip Cybersecurity, a cybersecurity consulting practice.

I am currently a member of the Tennis Miami Competitive2 (3.25) League but a future member of the Elite & Advanced (4.0) League (wink wink!)

This is my 2nd full season as I was recovering from an injury that kept me out of 2 other seasons earlier this year.

A friend of a friend told me about Tennis Miami when I was looking for regular matches to improve my skills.  I was tired of playing the same people over and over without any structure.

My goal is to play twice during the week and once on the weekend which ends up being about 2 to 3 times per week depending on scheduling and how my body holds up.

I love the structure of the league which allows you to schedule matches based on your availability vs a required day of the week as other leagues have.  And I love the tracking of scores and rankings for the league so you can see how you’re playing compared to others in your league.

Tell us about your most memorable match(es)? 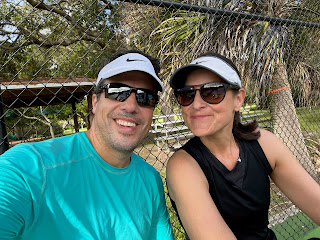 I had one match against someone that played mostly junk balls and frustrated me to the point I wanted to scream and smash racquets.  But I learned more in that match about the mental game and patience than any other time.  Outside of the league, just recently I played a match with my brother while we were in Park City, Utah in December in a “bubble” they put over the outdoor courts since there was 2ft of snow outside.  Playing at high altitude totally changes the game.

I don’t have many rivals but Jesus Gonzalez is who I’ve played with the most and it's always fun to play against him.

I feel like it's a big community and I’ve seen some players advance to other leagues and thought “that means I know I can do it too”.  Everyone is extremely friendly and I’ve never had a bad experience on the court.

My mother started me playing tennis when I was very young, however I chose baseball over tennis and played baseball through college.  I didn’t pick up tennis again for another 30+ years in 2021 when I wanted some “fun exercise” outside.  I have been playing regularly ever since. 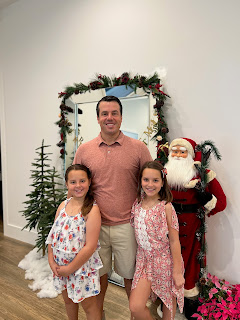 A little of both.  I have a lot of fun on the court and love the calorie burn.  But the competitive nature of the sport feels great, I feel like a kid when I’m out there chasing balls down.

I have never had an official rating but from everything I have read and other tournaments I’ve played I would comfortably say I’m at a 3.5 level.

I love the fitness aspect, the mental challenge, the opportunity to compete, the fact you can’t think about anything else on the court, and the social aspect.

I’m a big fan of anyone with a single handed backhand because that’s what I have so guys like Tsitsipas, Dimitrov, Musetti, Theim, Wawrinka, and of course Federer.  Besides that I’m a fan of Taylor Fritz (currently the top American), Nick Kyrios (excitement on the court), Casper Ruud (his playing demeanor), and Jack Sock (doubles skills),

When I’m not playing tennis I love to workout, I love to read, I love to spend time with my family which includes my amazing daughters and my incredible wife (who also plays tennis).